Looking Back: The Day I Met Robert F. Kennedy 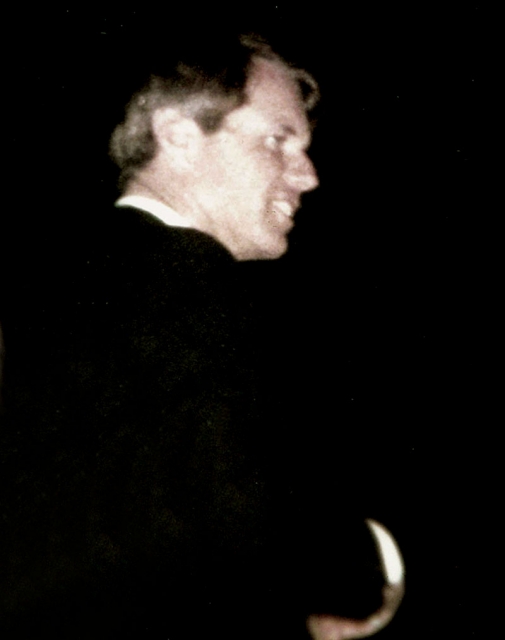 On Saturday March 24 of this year, I participated in a 50th anniversary celebration of Robert F. Kennedy's 1968 presidential campaign rally here in San Jose. The celebration took place at St. James Park, the location of the 1968 rally. I'd been honored with the task of delivering the keynote address. Along with speeches by several local politicians, actor Jeffrey Brian Adams provided an excellent re-enactment of Senator Kennedy's speech. One of the day's highlights was meeting photographer Ed Souza. Ed had attended the 1968 rally as a twelve-year-old, and had taken the only photos that I've ever seen of Robert Kennedy at the St. James Park rally. Other photos I have seen show Kennedy's arrival at the San Jose airport, as well as his Sunday visit to Our Lady of Guadalupe Church on the east side, but none from the rally. Ed is very generously allowing his photos to be shared here for the first time, and he also agreed to provide a first-hand account of Senator Kennedy's visit. 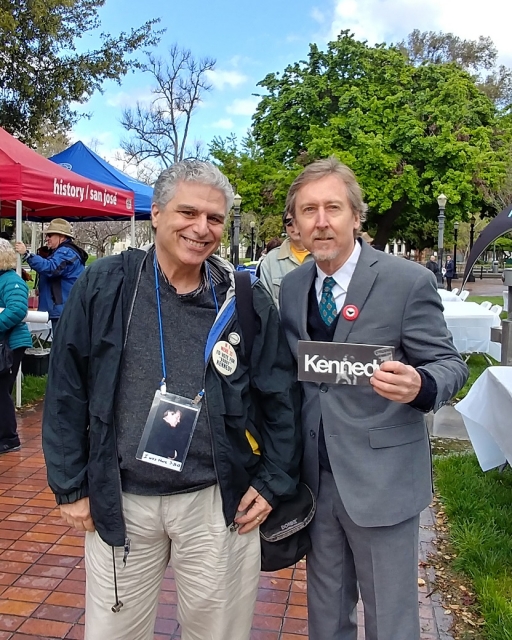 Image: Ed Souza (left) and me at the 50th anniversary celebration of Robert Kennedy's speech held in St. James Park on March 24th of this year. Photo ©Michael Pearce.

In 1968, I was a sixth grade student at Benjamin Cory Elementary School, and growing up in what was considered the Valley Fair area of San Jose. Though interested in politics, I did not consider myself as coming from a “political family”. I and most kids my age knew about the war in Vietnam, the troubles of President Johnson, and the efforts of “peace candidate” Senator Eugene McCarthy. I had not paid much attention to Campaign ‘68 until one Saturday morning in mid-March when all three television networks broadcast Senator Robert Kennedy’s announcement that he was running for President. Within the following week, the San Jose Mercury had run an advance article that said that Robert Kennedy was coming to San Jose!

Events were moving fast (as most did in 1968) and I knew that I wanted to be at the rally that was planned for the following Saturday night in St. James Park. If anything, I was deeply affected by the assassination of President Kennedy five years earlier, and wanted to see his brother. Somehow I convinced my father to drive me downtown that Saturday night.  Having never attended a political rally, I thought that arriving a half hour ahead of the 8pm start was plenty early. How wrong I was! The park was already crowded. My dad (who hates crowds) stood atop the courthouse steps across First Street. I was determined to get as close as I could.

A wooden five foot high platform had been built near the center of the park. It had a railing that was wrapped in red and blue bunting. The crowd was packed in close and I had to settle for ground level at the rear of the platform if I was even going to be able to see Senator Kennedy briefly, let alone hear him. In 1968, it is to be remembered that political rallies were not staged media events. There was little media coverage, and no visible security except for the San Jose Police who had cordoned off First and Second Streets at the park. Anyone could walk up and attend (no screening, no tickets) and get as close as they could. It seemed that the crowd was waiting for a while, but were not impatient. As I stood at the rear of the platform, I had the feeling that I was going to miss seeing RFK altogether. 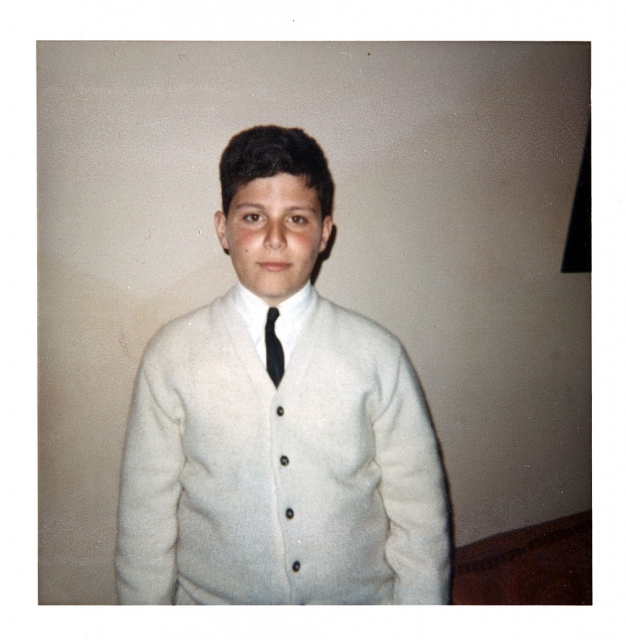 The kid next to me somehow found an extra folding chair which we both managed to stand on. The extra elevation gave me a clear view of the crowd. It was a sea of faces that stretched out as far as I could see. It seemed that all of San Jose was there. Soon Senator Kennedy’s entourage arrived. I could only tell by what I heard. The crowd was shouting and cheering as he made his way from his convertible. Then he climbed up the few stairs of the platform and he was there. The speaker’s podium was situated at stage left just past the platform’s stairs. There seemed to be one light that illuminated the podium. I stood (really balanced) about fifteen feet away and diagonally to the right. I took two photographs of Senator Kennedy with my flashcube equipped Kodak Instamatic 104. I knew the range of the flash wasn’t very far, so I hoped for the best. After those pictures were taken the invited dignitaries sat down and effectively blocked my view.

As I balanced on the chair and clung to the railing, I remember Senator Kennedy’s speech. The parts that registered were his comparing the various social injustices that prevailed in this country. He used the word indecent to describe a society that allows for such injustices. He also touched on the subject of the war and said that if our soldiers can be drafted and die “... then the South Vietnamese can do the same damn thing.” That brought great applause and was important to me as I hoped the war would end before possibly being drafted. Before long his speech ended and I could see, once the dignitaries in front of me stood up, that Senator Kennedy was still on the platform leaning over the railing and shaking hands with all those who reached out. It was bedlam as the energy of the crowd pressed forward. I remained balancing on the folding chair, hoping that the Senator might somehow make his way to the back of the platform.

Suddenly a man’s face appeared that I did not recognize. The man (whom I later learned was Bill Barry, Senator Kennedy’s personal bodyguard) was leaning over with an arm around the Senator’s waist. In an instant Robert Kennedy was shaking my hand! He offered his hand in an unusual way: three fingers. In the moment I did not want to let go. He winced a bit as he managed to let go of my grip. The feeling I had was not so much of hero worship, but something more profound. I somehow knew that Robert Kennedy represented true hope for the country, and that I may never witness the likes of him again. 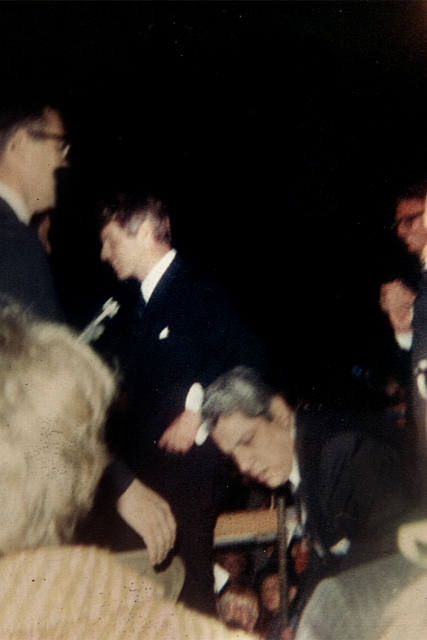 Image: Robert Kennedy prepares to speak. Ed Souza took two photographs of Senator Kennedy with his Instamatic camera while precariously perched on a folding chair. These are the only photos that I've seen of Robert Kennedy at his 1968 rally in St. James Park. Photo ©Edward Souza.

That night in March of 1968 has been seared into my memory as one of my life’s defining moments. After Robert Kennedy’s death, I summoned all the energy a twelve-year-old could that fall by volunteering for the late Congressman Don Edwards re-election campaign. I continued volunteering in Democratic campaigns until entering San Jose State University’s School of Journalism, where I majored in photojournalism. Looking back, I realize that rally in St. James Park greatly influenced the course of my life.

Over the past fifty years, I have photographed eight Presidents and dozens of presidential nominees and candidates. Robert Kennedy's message appealed to a broad coalition, one which I have not seen again. He was like a comet; suddenly here and sadly, suddenly gone. He is still missed. 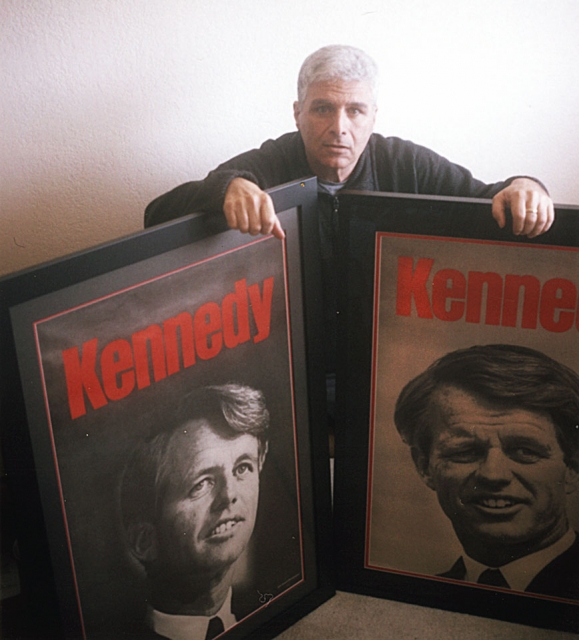 Image: Ed Souza credits his meeting Robert F. Kennedy as having a strong, positive influence on the course of his life. Photo courtesy of Edward Souza.

With Robert Kennedy’s assassination on June 6, 1968, we lost an important and influential voice; a voice that reflected a sincere and genuine desire to contribute to the betterment of our nation and our world. And though he was taken from us, his words from that Saturday evening in March of 1968 still inspire and encourage, "...we can make a difference. We can put this country together again, and turn its course around..."