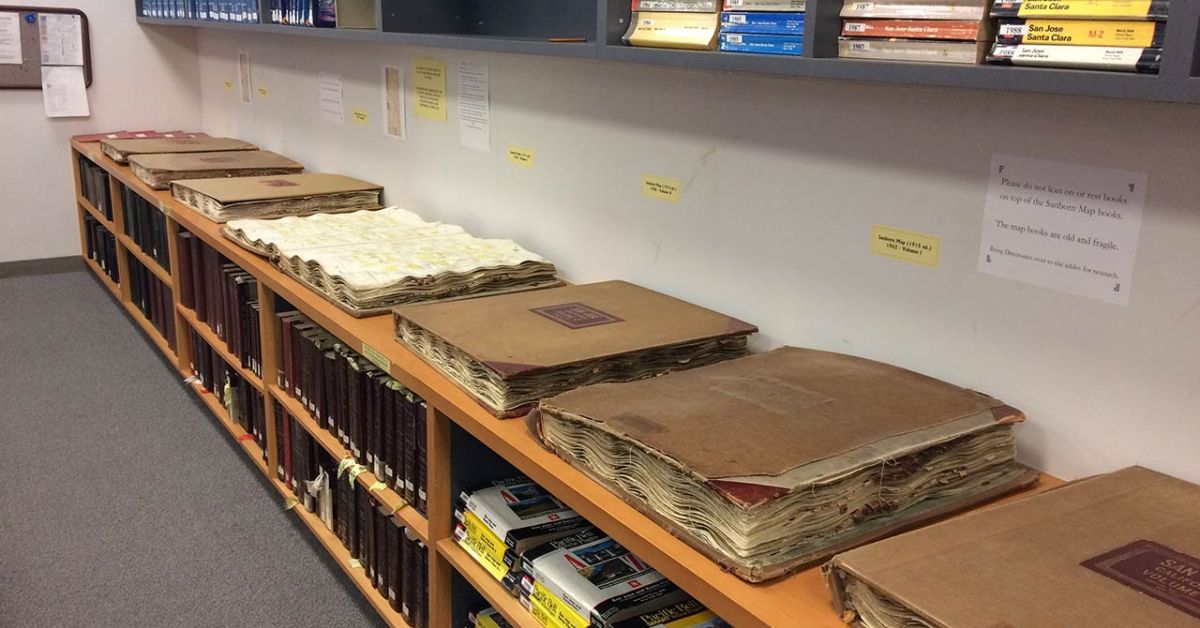 The California Room at the Dr. Martin Luther King, Jr. Library has many resources for researching the history of your house. From city directories which show who lived where and what they did for a living to Sanborn maps which show the location and outlines of buildings on your property a century ago, the California Room can help you research your old house.

San Jose City and vicinity Directories (1870-1979) – A City Directory lists the names of individuals living within a city along with their place of residence and occupation. To be listed, a person or property must have been located within city limits when the directory was issued (Large parts of present-day San José are not included in early city directories.) Before 1911 only property owners were included. Beginning with the 1911 edition, the names of spouses and children over 18 were also included. Directories prior to 1913 were by surname only. In 1913, a street index was added. This feature is helpful to those researching houses, since one can look up a specific address to find its residents. Note that street names have changed over time; for example, in 1913, 14th St. in San Jose became 17th St. A list of street name changes is available in the California Room. House numbers and parcels may change as well. Early San Jose directories include other cities in the area; the City Directories Index will help you determine coverage. An index key at the front of each directory will give you valuable information in deciphering symbols and abbreviations. In some of the older directories, occupation and ownership of property is listed. San José City Directories for 1870, 1887 and 1920 are available online. See our City Directories page for more information on how to use this resource.

Haines Criss-Cross Directories and Pacific Bell Reverse Directories – These directories date from the mid-1960s. They are useful for finding out who lived in your house after 1979 when the City Directories cease publication. They can also be used for cities and unincorporated areas outside San Jose.

California Room Index – This source indexes materials in the California Room (maps, newspaper clippings, scrapbooks, and research collections) referring to people, places, and events in San José and Santa Clara County History. The A-Z index can be helpful if you are not sure of spelling.

Historic Resources Inventory, City of San José – This inventory identifies structures in San José of historical and architectural significance. Such structures would receive careful scrutiny during land use and development planning. There is also the City of San José Landmarks Registry online.

Santa Clara County Heritage Resource Inventory – This inventory was published by the Santa Clara County Historical Commission in 1975 and 1979. Each edition lists historic landmarks and buildings by community with brief descriptions and black and white photographs for a few. The 1975 edition includes archeological sites and maps. The 1979 edition lists historic register designations and has an index of architects/builders/designers.

Historic Resources Survey Downtown San José Year 2000 – This survey funded by the City of San José examined all the properties in the downtown core area for historic significance. Those properties deemed historic are listed in this volume accompanied by their historic evaluation worksheet.

City of San José Historic Resources Evaluation Sheets – This three-binder set contains all the Historic Evaluation Sheets collected by the San José Planning Department for properties in San José over the last 25 years. The odds are small, but if someone has already done an historic evaluation of your property it will save you much time and effort.

Visual Inventory of Historic & Archeological Sites in San José – Compiled in the early 1970s by a group of local historians and architects who walked the older neighborhoods of San José looking for noteworthy structures. Each structure chosen was given an architectural and historical evaluation. Brief notes were taken and the owner/tenant was interviewed if possible. A photograph was also taken. The California Room has a copy of this five volume survey. The original is in the archive at History San José. This visual inventory is on site in the California Room.

Maps Can Be Helpful

Sanborn Fire Insurance Maps – These maps show in great detail lots, houses, and businesses located in central San José. Sanborn Maps covering cities in California, 1867-1970 are available online with your library card. Additional digitized Sanborns for area cities can be found thorough the Library of Congress website. Original Sanborn Maps covering the City of San Jose for 1932, 1939, 1950, 1958, and 1962 are available for viewing during California Room open hours. The appearance of your house in an old Sanborn Map can give a clue to its age, as well as it original architectural outline and the location of any outbuildings.

City of San José Block Books – These maps show the boundaries of all the lots in the City of San Jose along with the names of the property owners. The maps do not indicate if a structure is present, but they do allow you to find a name associated with a piece of property at a very early date. The San Jose City Block book published in March 1871 is available online. As well as The Block Book for the First Ward of the City of San Jose from approximately 1882 to 1886. A copy of the 1909 City Block Book as well as a 1924 multi volume set updated to the 1940s are available on site in the California Room. History San Jose has San Jose Block Books circa 1925-1965.

Brainard Atlas of Santa Clara County – This is a very useful series of maps published in the mid to late 1880s. Unlike other maps, this atlas shows only the agricultural, nonurban areas of Santa Clara County. As well as showing property owners, it often gives a brief description about each property explaining what was being grown there.

City and Street Maps – The California Room has a large collection of old maps for San José and Santa Clara County. While these maps may not show structures or land owners, they can help locate streets whose names have changed or streets which no longer exist. Maps can be searched using the California Room Index.

Finding More About Who Lived There

City directories, property maps and other documents often will give you the names of people who either owned or resided in your old house. It is often possible to learn more about these people by checking sources such as great registers, census records, and obituaries. Please see Genealogy Tips to get started.