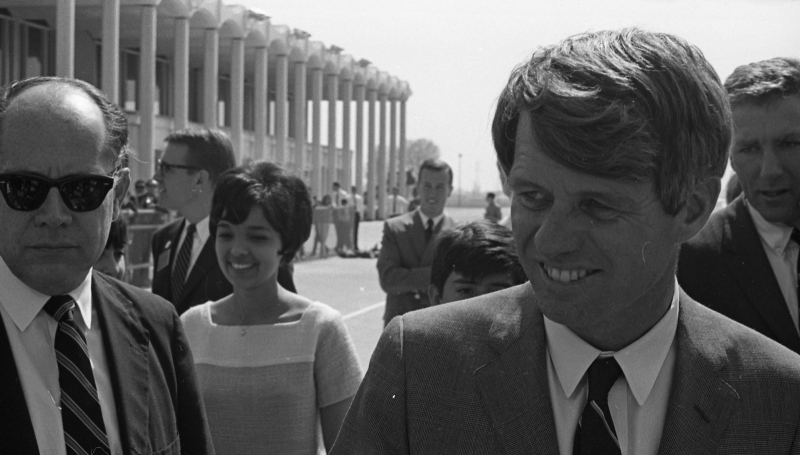 This year marks the fiftieth anniversary of Senator Robert F. Kennedy's speech in San Jose's St. James Park on March 23, 1968. Five years ago, I transcribed that speech from an audio recording, which I am sharing here for the first time. I am also pleased to be able to share previously unpublished Spartan Daily photos from Kennedy's visit.

I would like to dedicate this post to the memory of Senator Kennedy, and to a young Mexican busboy named Juan Romero. Mr. Romero did as much as any of us could have done for our senator as he lay mortally wounded shortly after midnight on June 5, 1968. Senator Kennedy's voice was silenced that day, but his words and his courageous, optimistic spirit remain to inspire and encourage. A fiftieth anniversary celebration of Senator Kennedy's visit has been scheduled for Saturday March 24, 2018 at St. James Park from 2:00 pm until 6:00 pm. The event will include a re-enactment of the speech, activities, and historical tours.

Transcribed from audio posted on www.archive.org by
Ralph M. Pearce with edits by Josie Amant

It must not be a, uh, it must not be a matter of simply counting and courting the votes of professional politicians.  If we have learned anything over the period of the last few years, it is that old solutions cannot solve the new problems that are facing this country, that face this state, and face my own state, the state of New York. For we are talking now about putting something together for this whole country, which can and we should differ on solutions, on programs, and on ideas, but we can no longer afford to differ on reality.  We can no longer afford to deceive ourselves.  It is time we face the problems that are -- exist in this country, and exist for us elsewhere around the world, with candor and with truth, and it's on that basis I run for President of the United States [applause].

If there is one overriding reality in this country, it is the danger that we have a erosion of a sense of national decency.  Make no mistake, decency is at the heart of the matter.  Poverty.  Poverty in this country is indecent.  Illiteracy is indecent.  The death or maiming of brave young men in the swamps of Asia -- that is also indecent [applause].

And it is also indecent for a man to work with his back and with his hands in the valleys of California without hope of ever seeing his son enter a university.  That is also indecent.  It is indecent for a man in the streets of New York, in Oakland, in Detroit, in Watts, to surrender the only life that he will ever have to despair.  It is indecent for the best of our young people to be driven to alienation and flight to the terrible exile of drugs and violence, to allow their hearts to wither in rage and with hatred.

This in my judgment, the year 1968, is a time to create, not to destroy.  This is a time to work -- for men to work out with a sense of decency, and not with bitterness.  This is a time to begin again, and that is why I run for President of the United States [applause].  And it is why -- it is why I come here to the state of California to ask for your help.  I cannot win the nomination without the help of the people of California, and I ask for your help [applause].

And I think there are things to be changed in this country.  We have a brave country, a courageous country, and a people who bleed with compassion about the problems of others within our own country and elsewhere around the globe, but we are troubled and this is a disturbing time.  As we stand here today, brave young men are fighting across an ocean.  Here, while the moon shines, men are dying on the other side of the earth. Which of them -- which of them might have written a poem?  Which of them might have cured cancer?  Which of them might have played in a World Series, or given us the gift of laughter from a stage, or helped build a bridge or build a university?  Which of them would have taught a child how to read?  And I believe it is our responsibility to make sure that these men live, and that is why I run for President of the United States [applause]. 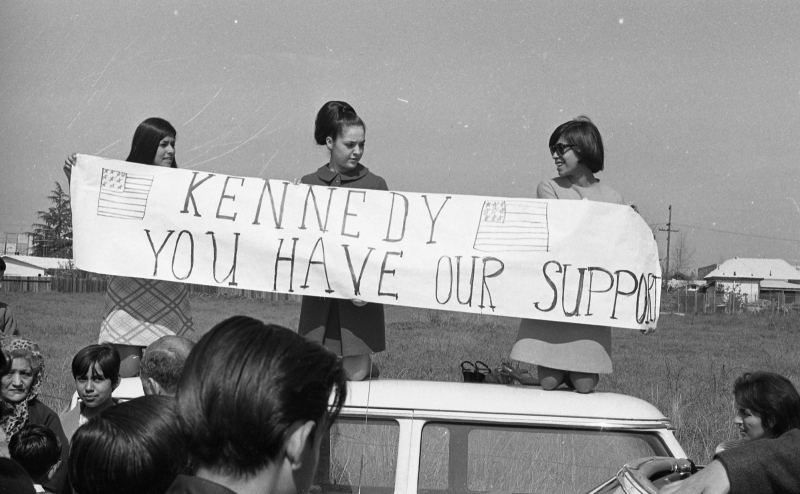 My friends, there are other tasks before us.  It is a time to begin to rebuild the grand alliance, to repair the bonds of trust and confidence with those historic allies whose friendship has been the basis of our security for so many years.  It is time to recall to ourselves our true responsibilities around the rest of the globe, to recognize that we cannot sit frozen and indifferent while every day ten thousand of our fellow human beings starve elsewhere in the world, that it is a monstrous disproportion that we should buy eight million new cars every year, while most of the world goes without shoes.  I think there are things we can do, and I want to join with you in doing them [applause].

And I think that it is time that we recognize that frequently in the past, we have wealth -- measured our wealth and our progress by the wrong standards.  Air pollution, and cigarette advertising, the destruction of the redwoods and the building of jails, all these increase the Gross National Product, but in my judgment they do not make us richer.  The [applause] -- the health of our children, the quality of their education, the intelligence of our public debate and the integrity of our public officials, these and in other intangible values are not included in the Gross National Product, but they -- they are the truest indicators of wealth and really the only true measure of progress in the United States [applause].

And this is the kind of wealth -- and this is the kind of wealth that I want and I know that all of you want for the United States of America [applause].  There is difficulty and division in our land today, but in the last six days, I have been to Kansas and to Alabama, to Tennessee, and to my own state of New York, and now I have come to California, and I think there is a stirring of something new in the United States. It is not the creation of any candidate or leader, it is nothing that I have made, but it is a sense that there is a possibility of a different future, that the American people are discovering that they control their own destiny, and that they are going to move ahead, that they are going to make this land as they see fit, and not as it is created by others a thousand miles away [applause].

Some of them are young in years, as I see before me here tonight, but all of them are young in spirit.  They are beginning to feel that change is possible, that hope is possible, that by the work of their own hands, and the love of their own hearts, they can restore that fundamental sense of decency for themselves, for each other, and for our posterity, for our children and for the next generation of Americans, and I think that's what we're going to commit ourselves here in the state of California…[ inaudible, applause].

There are still many who feel that their efforts cannot make a difference, but the alienated and the apathetic alike I believe will dwindle in numbers and decline in strength, and, finally, they too will see, as more and more are seeing every day, that we can make a difference.  We can put this country together again and we can turn its course around, and that's why I'm running for President of the United States [applause].  So I come here to ask for your help.  I ask for the help of those who are proud of this country, proud of what we've done, proud of what we've contributed, proud of what we stand for, and I ask for those -- the help of those who are dissatisfied, who are proud of all these things, but yet feel that we could do better, that we're not going to stand for poverty, that we're not going to permit illiteracy, that we're going to find jobs for every young man and every young woman who wants to work, that we're committing ourselves to that [applause]. 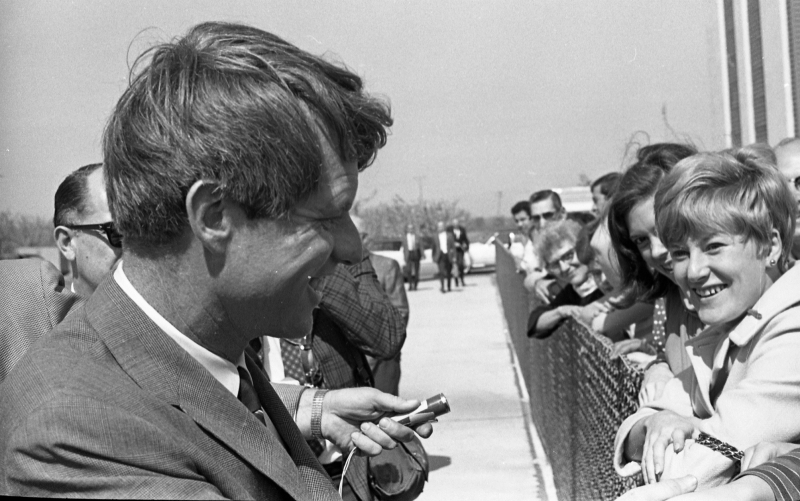