This year marks the forty-fifth anniversary of Robert Kennedy’s 1968 presidential campaign.  Kennedy had announced his candidacy on March 16, 1968, and he spoke in San Jose’s St. James Park about a week later on March 23.  According to the book, The Last Campaign by Thurston Clarke, Kennedy’s stop in San Jose, California was part of a ten-day, thirteen-state, cross-country trip that began in Alabama and Tennessee on March 21.  The tour included stops in New York, Oregon, Washington, Idaho, Utah, Colorado, Indiana, and New Mexico.  Kennedy's efforts in California culminated in his being shot in Los Angeles shortly after announcing his victory in the California primary on June 5.  He died the following day.

A few weeks ago, I had a patron come into the California Room asking if we had a transcript of Kennedy’s March 23, 1968 speech in St. James Park.  I found a folder on Robert F. Kennedy for San Jose in our index, but the articles contained just brief quotes from his speech.  Searching on Google, I found an audio recording of the speech, but I wasn’t able to locate a transcription of the speech, which is what the patron wanted.  And so I decided that I’d transcribe the roughly fifteen minute speech during slow times at the California Room desk.  I recently finished the transcript, and it’s now available in the California Room’s San Jose clipping file for Robert F. Kennedy.

Robert Kennedy delivered his St. James Park speech at 8 pm in the evening.  According to author Thurston Clarke, even when Kennedy delivered a prepared speech, it came off as improvised.  In fact, Kennedy often spent twice as long responding to questions which sometimes became "lengthy riffs."  I asked my wife if she remembered when Kennedy came to San Jose, and she said that she’d attended the rally in St. James Park when he delivered the speech.  As a girl of 15, she could only recall that she saw Shirley McLaine in attendance.  I prodded her with questions, but that was the only detail she could recall.  I was 8 years old at the time and I remember my third grade teacher taking a poll.  She asked how many parents would vote for a specific candidate, and I remember Kennedy coming out on top.  I remember hearing that he was shot and in the hospital, and then the disappointment of hearing that he’d died. 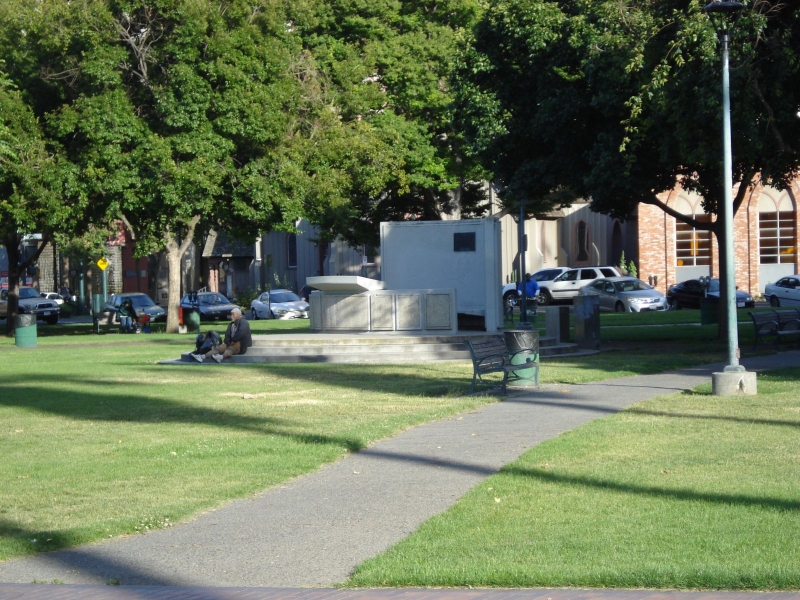 In 1970, a memorial podium was built in St. James Park. San Jose Mercury columnist Scott Herhold wrote a column about the memorial in 2008, which marked the fortieth anniversary of Kennedy’s visit.  Attached to the memorial is a plaque bearing the famous Kennedy quote, "There are those that look at things the way they are, and ask why? I dream of things that never were, and ask why not?"