The San Jose Public Library has been at the forefront of library automation systems. Before the time of search boxes and digitized catalogue records, the library depended on a card catalogue, checkout slips, and banks of file cabinets. However, even long before the internet age, SJPL sought to streamline their operations with emerging automated technologies. 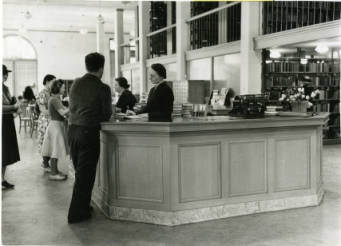 The first big jump in automation occurred in 1958, when the library got rid of the old Gaylord charge out system and switched to the Addressograph based circulation system. This system used embossed plastic cards, multi-part forms, and a hand operated imprinting machine to dramatically reduce the workload for librarians. However, even this system still required a great deal of work behind the circulation desk to ensure an efficient operation of the library. Librarians still had to pull "charge slips" for returned books (known as "slipping") and punch additional slips for patrons and books.

Then in the early 1970s, with major improvements in computing in Silicon Valley, the San Jose Public Library installed its first Dialog terminal used for searching nationwide bibliographic databases. While this system allowed librarians to search through some 300+ databases for bibliographic records, it did not solve the use of over 3 million transaction slips and forms a year to keep the library running efficiently. Then with city approval, SJPL purchased a SCI computerized system to take over circulation records. 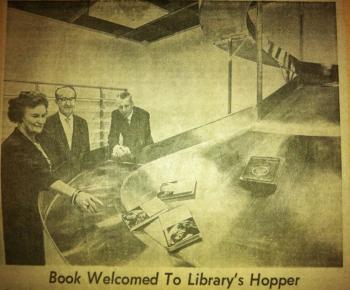 In February 1977, the encoding of books began for the conversion to the new system, including most of the library branches. While the system showed promise, it was prone to slow response times and had significant limits in its ability to accommodate the expanding branch library system. In 1986 a new CPU was installed to increase response time and the number of terminals that could be utilized, but library staff quickly realized that technology was changing rapidly and they needed to upgrade the whole system.

In June 1987, the City Council approved a contract for a fully integrated system for the main library and its branches. The new CLSI system would not only take over circulation record functions, but also manage patron files as well as claims procedures. This system also integrated library search functions so that patrons could track down materials by keyword or subject.

This of course was not the end of San Jose Public Library's effort to utilize computerized automation systems to streamline its operations. Today SJPL operates a state of the art circulation system that has dramatically reduced the labor involved in circulation and records processing. Just this year, coinciding with the 10th anniversary of SJPL's move to the new King Library building, the library has rolled out a new online catalogue to improve efficiency.