Looking Back: The Day My Neighbor's House Blew Up! 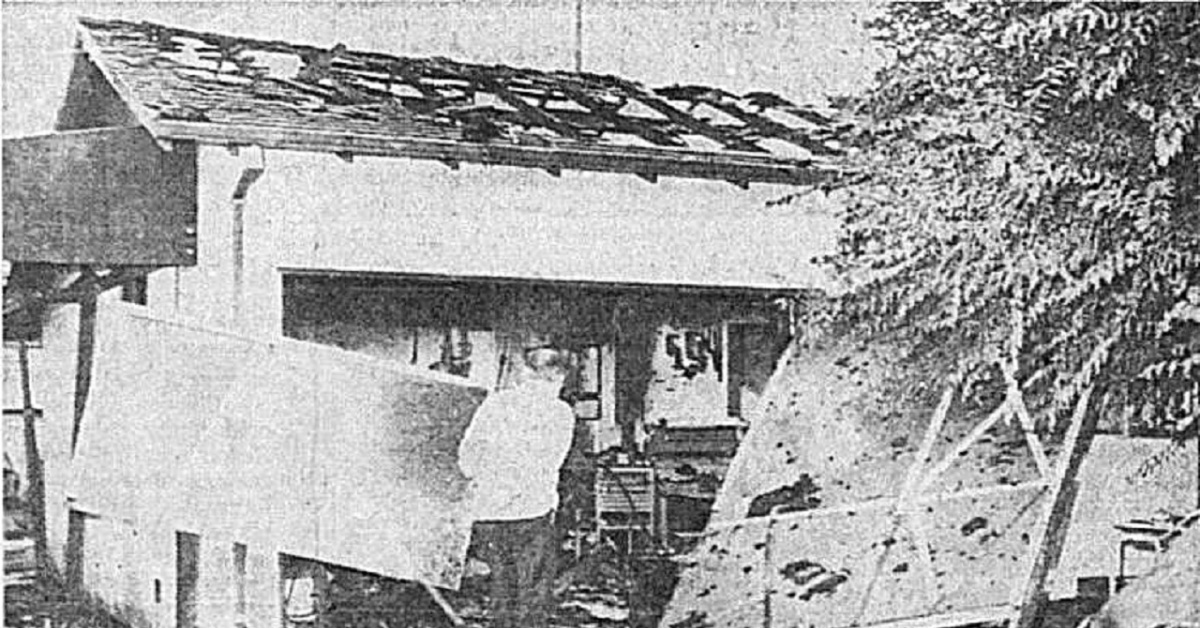 Image: A neighbor surveys the damage following the explosion in San Jose's "Birdland" neighborhood on June 30, 1972. Photo from the July 1, 1972 issue of the San Jose Mercury News

In the late afternoon of Friday June 30, 1972, I sat at the desk in my bedroom facing the backyard. Suddenly there was a violent explosion that shook the house. The immediate thoughts that raced through my twelve-year-old mind were that either a light plane had struck the house, or that my mother had driven our 1959 Oldsmobile into the adjoining family room. Either way, I was concerned whether or not my little brother and sister were still alive. Bracing myself, I opened my bedroom door and peeked out. My little brother was okay, the Oldsmobile  was safely parked outside. Running through the house and scanning the street from the front windows, I could find no signs of catastrophe.  I then ran out to the backyard and could see flames along the roofline of our backdoor neighbor's house. Our next-door neighbor could also see the flames, and so we both got our garden hoses with pressure nozzles and directed water at the roof. The fire department arrived fairly quickly and were eventually able to put the fire out.

The story begins with my neighbor Dean Pfundstein in his driveway unloading an acetylene tank (for welding) out of the back of his pick-up truck. As he sat the tank down, he heard a strange sound. Suspicious of the sound, he quickly inspected the exterior of the tank and noticed a small spot beginning to grow on the side. Seeing that the tank was obviously defective, he quickly put the sprinkler on it and yelled at some nearby kids to "Get the Hell out of here now!" He then ran up the long driveway into the garage and through the doorway into his kitchen. No sooner had he entered the kitchen, than the solid wood door behind him was blown off its hinges pushing him towards the adjoining front room which was bright orange from the blast. Dean described that moment as floating through the air in slow motion, with shards of glass from the windows dancing out in front of him. He didn't suffer any cuts from the glass, though the back of his legs were burned. When the tank exploded sending shock waves and shattering nearby windows, it sent a fireball into the garage igniting the structure internally damaging the garage, kitchen, and living room. The acetylene tank itself hit Dean's truck and careened off of my father's 1959 356 A model Porsche that was in the driveway awaiting restoration. The top portion of the tank was later found lodged in a tree the next block over. 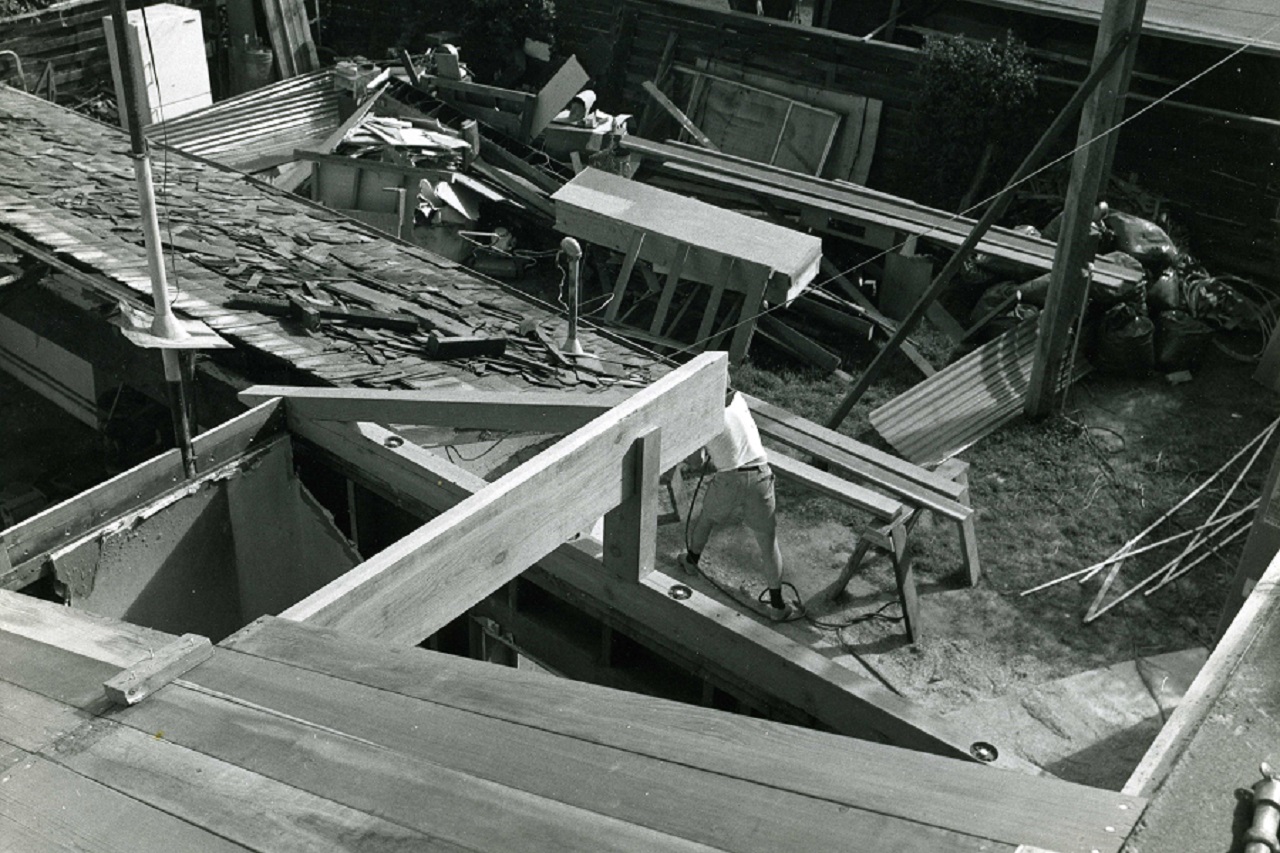 Caption
Image: Glenn Pearce works in the yard below in this photo showing the reconstruction of the living room ceiling and roof. Photo by Dean Pfundstein

Neighbors called the fire department as Dean began moving cars out of his driveway and side yard. This was done to prevent further damage to the cars, create space for the firemen, and to also allay concerns regarding a cottage industry in a residential neighborhood. Dean was later transported to the hospital by ambulance along with a fireman who'd fallen through the roof. Though the kitchen door was eventually replaced, he saved it, as it had saved him. I suppose that it was fortunate that the tank exploded where it did. Imagine if a bump on the drive home had set the tank off. Dean would have likely lost his life as well as others in the immediate vicinity. 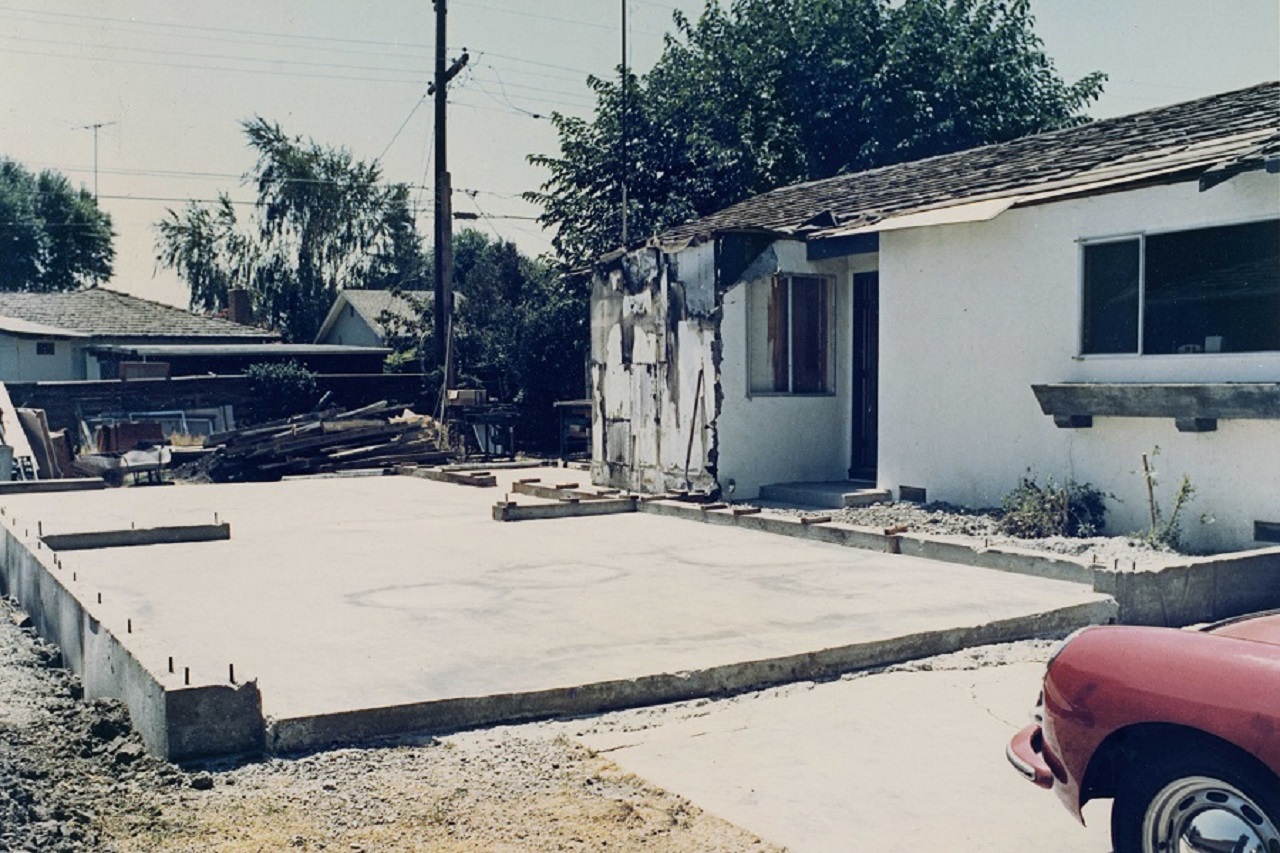 Caption
Image: Foundation for a new double garage with a second story. Photo by Dean Pfundstein

Dean ran what he called a "cottage industry" out of his house. Single and without children, he turned one spare bedroom into a design and computer programming room, and another into an electronics room with a photo lab. His front room had a Pfaff industrial type sewing machine with an open area for producing car interiors. Across from his laundry room was a tool crib, where he stored every imaginable tool and materials such as automotive filler, lacquer thinner, and sandpaper. His front garage was for car storage, while his drive-through rear garage housed a hoist for pulling engines, a milling machine (which could run off of computer-generated programs), a lathe, a large air compressor, and several movable work benches. The rear garage opened directly to car lift. Numerous cars were parked around the yard which included a cabinet for sandblasting. The front extra garage was added after the explosion along with a second story which was originally intended as an apartment for his mother, but after she passed it became a storage area for car restoration parts and other materials. 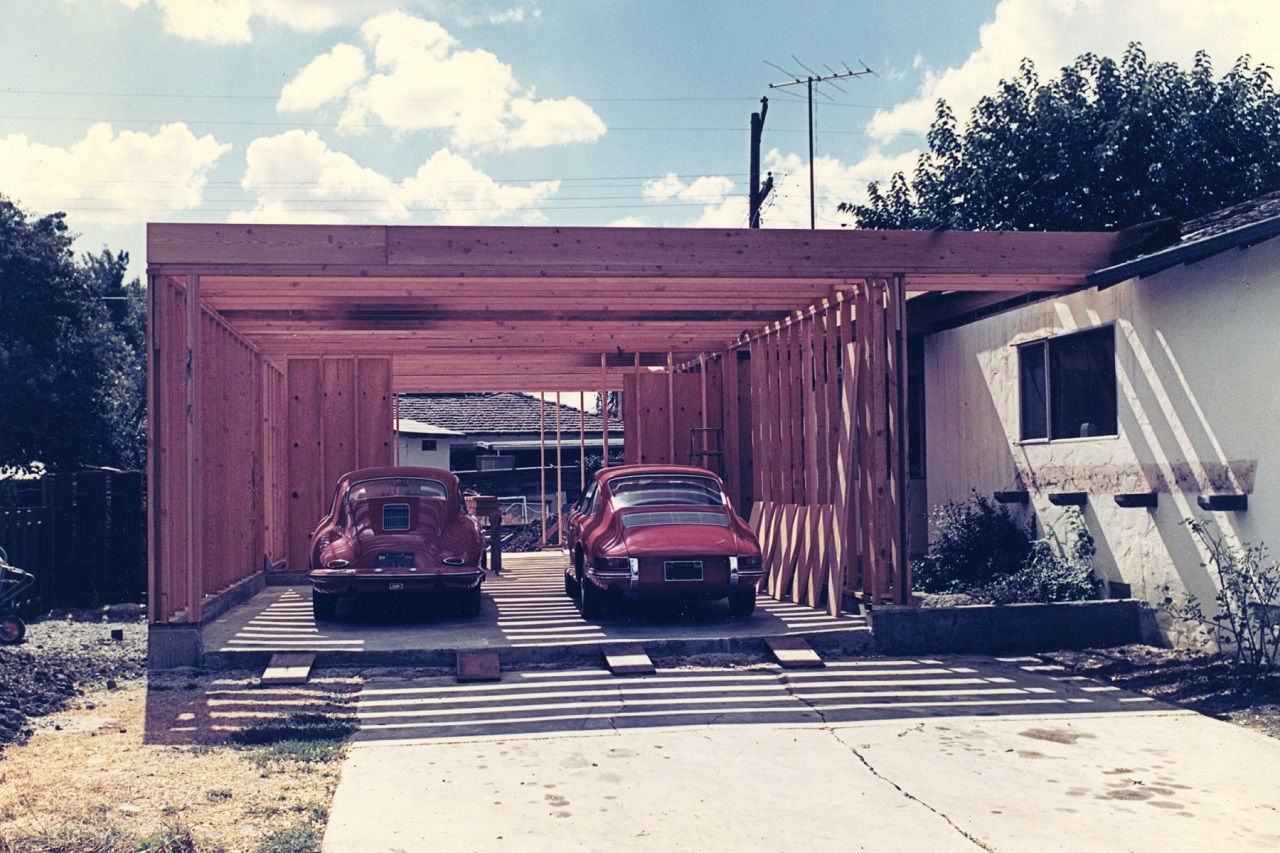 I began working for Dean a few years later. We'd gotten to know him pretty well and had turned a section of the back fence into a gate into his yard. He always opened the rear garage door when working, so anytime it was opened we were welcome to walk right in. I started at about $2.50 an hour and began by sandblasting parts. From there I began disassembly and sometimes degreasing. I eventually got to the point where he was having me sand and apply primer to car body parts. I also learned how to use a cutting torch, work with fiberglass, and do some basic upholstery. All activities that not only taught me some specific skills, but generally increased my confidence. Most of the cars he worked on and restored were classic Porsches, however he also worked on Jaguars, and other classic cars. Many of the cars were complete restorations, as Dean could do machining, body work, electrical, paint and upholstery. 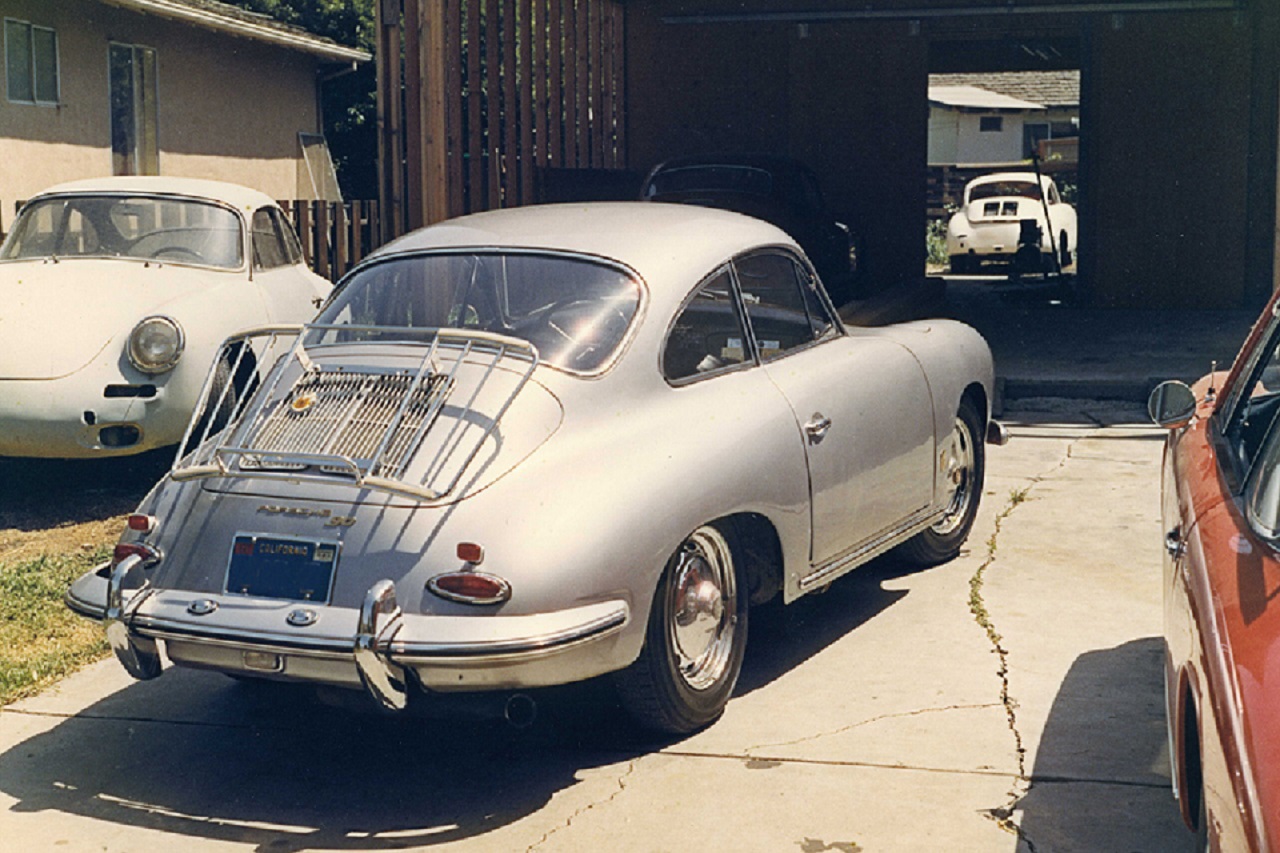 Caption
Image: A customer's 356 Porsche is parked in front of the new drive-through double garage. Photo by Dean Pfundstein

Dean's design skills engaged him in a number of interesting projects. Early in his career, he designed a train car counter for Southern Pacific, a state-of-the-art conference center for San Francisco's Bank of America building, and according to his father, elements of the equipment that captured Neil Armstrong's first steps on the Moon. One project that Dean was working on during my time with him, was the fabrication of a replica Duesenberg that incorporated the starboard engine of a WWII P-38 fighter. He did some air-flow calculations and determined that he could use a four-barrel Holley carburetor to feed the Allison V-12 aircraft engine. The project was proposed by local entrepreneur Jim Hammers. Jim also joined Dean in another project to develop a patented "Cam-Loc" wire wheel for show and custom vehicles. 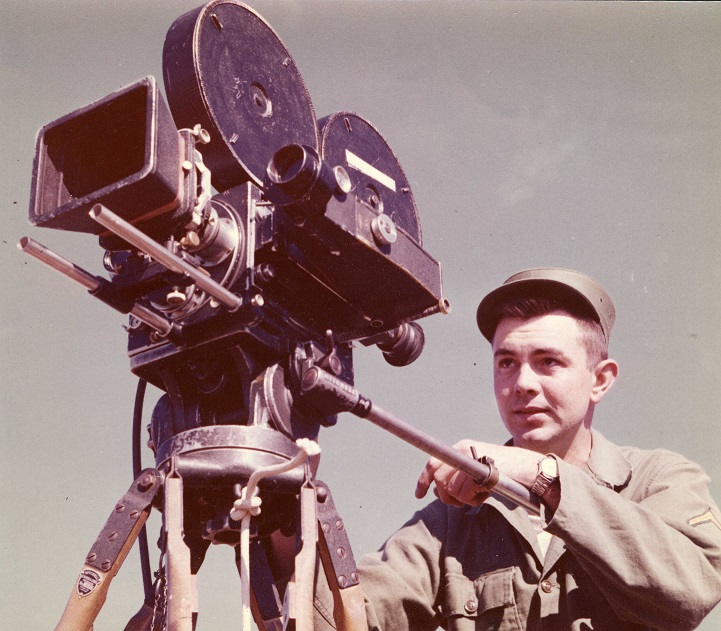 Image: Dean operating a movie camera during his time in the Army. Collection of Ralph Pearce

My father and I were always amazed at the breadth and depth of Dean's knowledge. For most of us, conversations with Dean were conversations between teacher and student. He was born Dean Wesley Pfundstein on August 7, 1934, in Rockford, Illinois. His father, a Presbyterian minister, moved the family to Los Angeles when he was young. In the early 1950s, Dean attended the USC Motion Picture Film School, earning a degree in Photography with a major in Cinematography. In the late 1950s, he joined the US Army and was assigned to the Army Pictorial Center where he worked as a camera operator, making training and documentary films. Dean later moved to San Jose, joining San Jose State College as an instructor in 1961. Three students, Alex Liu, Charlie Cortsen, and Doug Carson eventually became close friends of his. 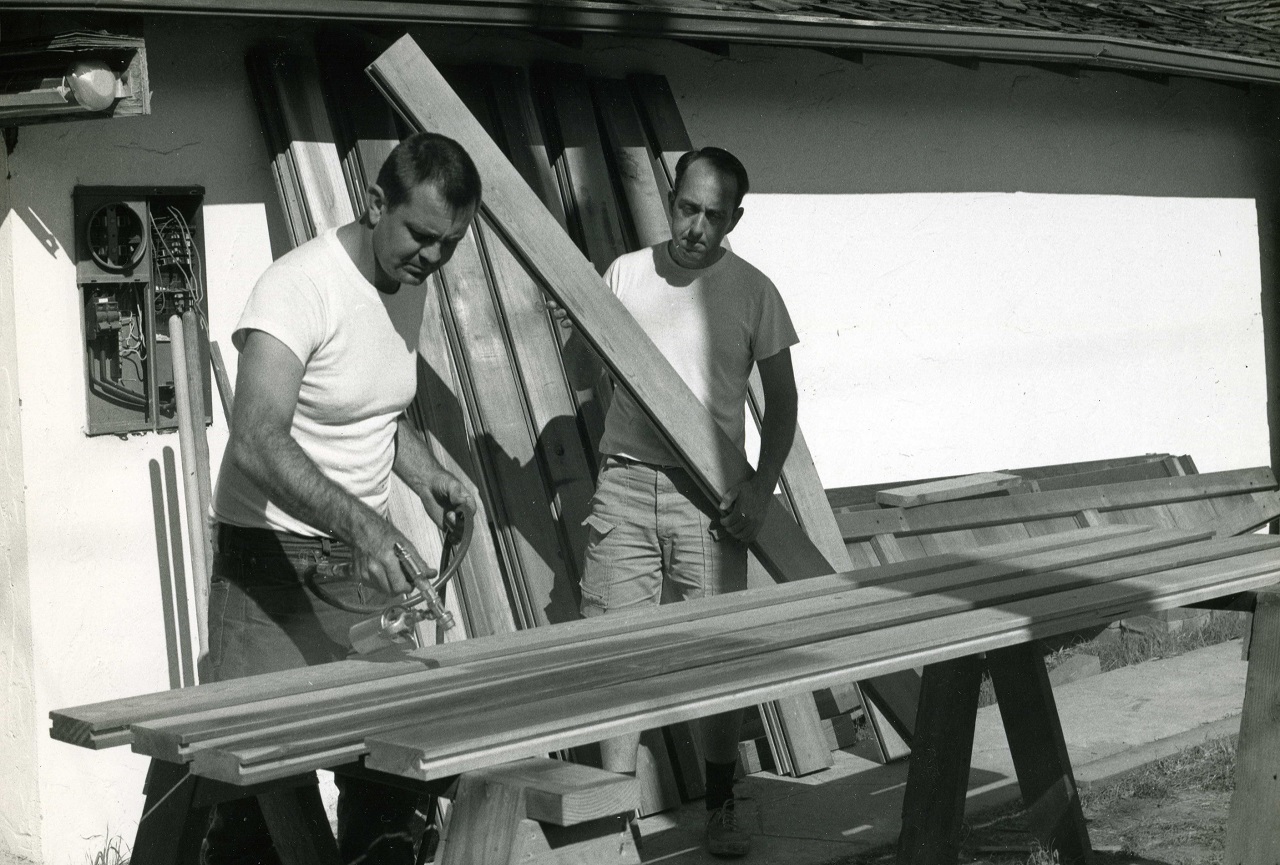 Caption
Image: Dean (left) and Glenn at work. Dean did the basic design and construction. Damian Speno later completed the work on the second story, which included converting the rear garage to additional living space. Collection of Ralph Pearce

On Sunday April 8, 1984, I went through our back gate into Dean's backyard and then knocked on his back sliding glass door. My timing was good, as Dean was just coming in the front door with a couple bag of groceries from the store. Dean set them down, then let me in. We chatted as he put his groceries away. As he pulled out a carton of eggs he joked, "This'll speed up that heart attack!"  Then considering what he'd just said, he added, "You know, even in a wheelchair, there's still so many worthwhile things a person can do."  He then went on about computers and his design work.

Dean suffered a stroke two days after our conversation. My last visit with him was a few days later at Good Samaritan Hospital. Though there were likely contributing factors, Dean felt sure that the stroke was brought on by stress. Besides financial concerns, he'd also been named in an ongoing lawsuit regarding a safety device that he'd modified for a machine shop. He was eventually sent to the VA hospital in Palo Alto where he died of a heart attack about a month later on May 12, 1984. He was forty-nine years old. The lawsuit was eventually dismissed. Looking back on all of my own projects, I realize how indebted I am to Dean's patience, instruction, and encouragement.

More Reading from the California Room

Your Comment
I liked this blog posting 📫 it takes back to another time in the history of san jose. People did things and stuff with their hands back then.