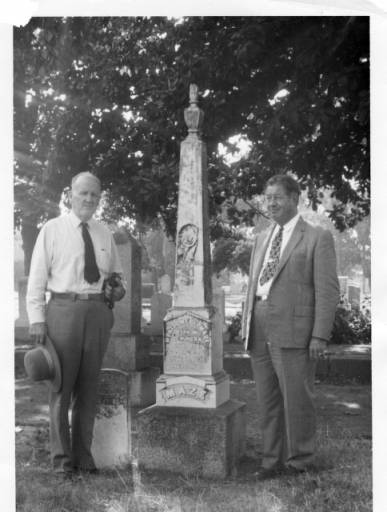 I remember standing outside of La Villa Delicatessen on Lincoln Avenue about 1977 or so, when out walks a mustachioed fellow in a kind of khaki uniform with a broad-brimmed, circular hat like a park ranger would wear. I watched him as he began to survey the scene with a kind of contemplative seriousness. I wondered who on earth this guy was.

In 1978, I began working at a used bookstore on the corner of Lincoln and Franquette Avenues, near Curtner. One day this same fellow walks in, still wearing that distinctive outfit. The owner of the bookstore, Myron Wahlstrand, introduced me to him as Clyde Arbuckle, San Jose’s City Historian. It turned out that Clyde lived just down the street on Franquette, and I became a student of his (as so many of us did) during his visits to the store over the many years that I worked there.

Clyde Arbuckle was born William Clyde Arbuckle on April 11, 1903 in Santa Clara. Because Clyde’s father was also named William, Clyde used his middle name and had a number of nicknames including Cy, Buckle, and Bucky. One of Clyde’s earliest memories was of the Great 1906 San Francisco Earthquake, which occurred when he was three. He had a number of half brothers and sisters, one of whom was silent film star Roscoe "Fatty" Arbuckle.

In the accompanying photo from the California Room archives, Clyde (left) poses with Colonel Waddell F. Smith at the gravesite of Montgomery Maze in Oak Hill Memorial Park.

Clyde left school in 1918 at the age of fifteen, taking on many jobs including one with the American Railway Express which became a permanent position from 1922 through 1947. Clyde became a successful bike racer, winning a number of titles from about 1920 through 1926. From about the mid-1920s through 1934, Clyde also sidelined as a professional banjo player. In 1926, Clyde met his future wife Helen, marrying her in 1932. They had their first child Jim in 1935 and a daughter Susan in 1936.

In 1945, Clyde became San Jose’s first City Historian. The Historic Landmarks Commission was formed that same year, and Clyde served as secretary until 1970. In 1949, a replica of San Jose’s State House (meeting place of the first State Legislature) was built in City Hall Plaza (now Plaza de Cesar Chavez). It contained a history exhibit curated by Clyde. The exhibit was so popular, that the State House was moved to a permanent location at the Santa Clara County Fairgrounds in 1950, with Clyde as director and curator of the new San Jose Historical Museum (now History San Jose). In 1962, a San Jose elementary school was named in his honor.

In 1970, under the urging of friend and fellow preservationist Theron Fox, Clyde was commissioned to write the definitive history of San Jose. The history was published in 1985, printed by friend and history buff Leonard McKay (Smith & McKay Printing), who has been said to have contributed greatly to the book’s completion. Clyde also wrote Historic Names of Persons and Places in Santa Clara County (with Roscoe D. Wyatt in 1948), and Santa Clara County Ranchos in 1968. He was an active member of the Ancient and Honorable Order of E. Clampus Vitas, the California Pioneers of Santa Clara Valley, and the Argonauts Historical Society, as well as being a Mason. In 1998, Clyde passed away at the age of 94.