This week we are looking back at the Agnews State Hospital. The hospital is most famously known as the site of the greatest loss of life in Santa Clara County after the 1906 earthquake. Eleven officials and over one-hundred patients were crushed when the main treatment building collapsed. But the history of Agnews is more interesting than this grim memory.

Agnews State Hospital, originally known as the “Great Asylum for the Insane,” finished construction in 1888 at a cost of around $750,000. Located in the area known at the time as Agnew Station, Agnews State Hospital was the premier California institution for assisting and treating the mentally ill. The hospital pumped $135,000 annually into the community purchasing local supplies and paying wages to its employees. The architecture of the Agnews’ buildings were designed to not only provide efficient practical patient care as it had claimed, but also to ensure good health and a positive state of mind by designing all rooms to be exposed to the afternoon winds and to be lit by natural light. 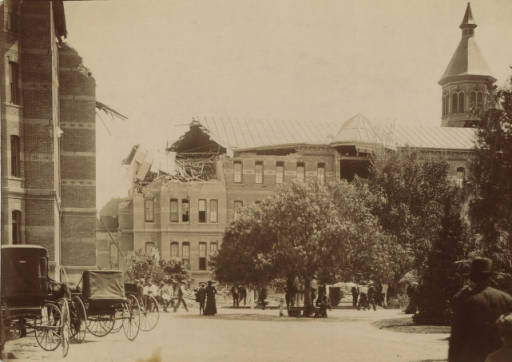 Yet, early in the morning on April 18, 1906, residents of the whole San Francisco Bay Area awoke to a violent earthquake. While the destruction to San Francisco is well known, other cities like San José received a great amount of damage and loss of life. The downtown district was hit particularly hard with the near destruction of a dozen or so buildings, including: St. Patrick’s Cathedral, the Phelan building, and the Elks Hall and stores in the heart of downtown. The greatest loss of life in the area however was at the hospital, where the 11 officials and 101 patients perished. News sources from the time stoked a little bit of fear by claiming that, "a number of insane having escaped from the demolished asylum, [were] running at random about the country." While these reports were likely unfounded, the heightened fear of looters and criminals preying on devestated communities could be seen in numerous official documents and public flyers warning the public to be vigilant.

After the earthquake though, the hospital was rebuilt in a more low-rise, Mediterranean Revival style similar to the State Normal School (now San Jose State University). The hospital was then reopened in 1911 as the Agnews State Mental Hospital. The state hospital continued its service to the community until the mid-1970s, when the passage of the Laterman Act (1971) transferred mental health treatment programs to local communities in an attempt to provide better care. This led the state to close many state hospitals throughout the state, including Agnews. 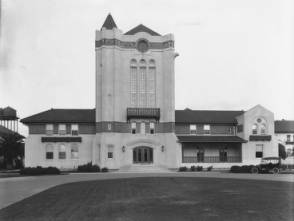 In 1996, the State of California offered up 90 acres of the Agnews land for sale. Through intense community interest, debate, and cooperation, Sun Microsystems purchased the land with the agreement to invest $10 million in the restoration of key historic buildings: including the Clock Tower Building with the clock’s original Seth Thomas mechanisms from 1911, as well as the director’s mansion from 1885. Today, the Angews Developmental Center is utilized by Oracle as a site for research and development. The site has been listed on the National Register of Historic Places since August 13, 1997, as “Agnews Insane Asylum.”

For those interested in reading more about the "Agnews Insane Asylum" and the history of San Jose after the great earthquake of 1906, take a look at the recommended reading below.

Your Comment
Looking to see if my mother was in a picture.

Your Comment
I think my Aunt Mary Lee Hershberger was a psychologist there,

Your Comment
I remember visiting my mom when I was 3 or 4 years old in that place. She always complained about the electric shock treatments she had there.

Your Comment
I worked at Agnew as a painter and 75 to 77 it was kind of eerie with patient locking all around you.

Your Comment
My grandmother worked as a RN here for over 35 years. She lived on the grounds and I would stay with her on weekends and go to irk with her. I would even spend time grooming patients and talking to them. It was a little scary looking back and my grandmother Joan told me they did use electric shock therapy then and it was unnerving. I wish I had pictures to remember my time there.

Your Comment
Alice Fisher and Mrs Stansfield headed the one year trading program for prospective psychiatric Tecnicians in the 1970’s. A experience at Agnews and the Rappaport building I’ll never forget.

Looking for a family member who either worked or lived there

Your Comment
I am tracing a family member who died there July 30, 1958, I have no idea if he lived there as a patient or if he worked there and lived there. Does anyone know of a site to find a list of patients and workers? He moved there from Iowa in 1942, the last time his family heard from him was 1945, he seems to be a ghost in the census. Any guidance would be helpful.
With thanks,
Carol

Looking for a family member who either worked or lived there

Your Comment
Thank you, Ralph, I sent an email off hopefully they respond, do state hospitals keep a list of employees by chance? that would certainly narrow it down. thank you again

Your Comment
My great grandmother was a patient there from 1917 until her death in December, 1938. Her husband, my great grandfather, was in another asylum for 9 years, until his oldest son signed off on transferring him to Agnews. He died in 1934. Are there any records available for patients from this time period?

Your Comment
I'm unaware of any records other than those that you might find on Ancestry.com or through this California Department of State Hospital webpage: https://www.dsh.ca.gov/Hospitals/Patient_Information_Requests_FAQs.html

Your Comment
What did M.S.O.T stand for it was a job position within the hospital?

Your Comment
Hi Reese, not sure about "M.S.O.T." in terms of Agnews State Hospital, however an internet search indicates that MSOT does stand for a Master of Science in Occupational Therapy which can apply to mental health. Hope this helps.

Your Comment
In May 1985 I spent one week in agnews state mental facility but not as a patient . The California Dept of Forestry utilize that facility for a while to do fire fighter training. that was my experience at that facility and yes it Was very creepy. We had to stay in there and sleep in those beds and use their facilities I will never forget it.

Your Comment
Hi there. I'm looking for some records in regards to employees who where housed at Agnews. I have memories of visiting and staying over night with my father. Rumor had it that my dad was a patient and not an employee. I'm trying to collaborate my memories.

Your Comment
I'm unaware of any records other than those that you might find on Ancestry.com or through this California Department of State Hospital webpage: https://www.dsh.ca.gov/Hospitals/Patient_Information_Requests_FAQs.html

I am currently working on the land where they tore down a large portion of this facility.

We are constructing a school on a fifty acre partial of this once sprawling facilities campus.

However there is some of the hospitals buildings still standing . It looks like maybe this main building a four-story building or five-story building with shipping and receiving docks low and smoke stacks high.

And two buildings that were dedicated to the Catholic Church in the church worshiping and school of some sort maybe.

Your Comment
The California Room normally provides rather limited research assistance, however we're trying to provide more during our public closure due to the pandemic. Please forward your information request to our California Room archivist Shane Curtin: shane.curtin@sjlibrary.org

I was working in this Hospital

Your Comment
I am a doctor in Medicine that in 1969 or 1970 I was a médical resident arrived from Madrid University during three months in the Agnews State Hospital, with another spanish doctor. I still remember director Dr Jeffress, and some medical students, R.Korn, and, two canadian. In that time we were living in one apartments building in the same hospital. In 2016 I was visiting the old Agnews Hospital as the Oracle Head Quarters Office

My Great Grandmother was a patient in 1895

Your Comment
My great grandmother jumped from a window in San Francisco, on July 12, 1895. She died seven days later at Agnew's. She died at age 32, after having eight children.

My mom worked there

Your Comment
My mom, Marsha worked there in the 1980s. I remember attending daycare there. When the earthquake hit in 1989 my brother and I were playing outside on the grounds and my brother had just went down the slide. We were all envious that his turn was so awesome. I remember the big Palm trees swaying back-and-forth as our teachers try to round us all together.

father as a patient

Your Comment
I believe my father was a patient there in the mid 1960's. I also remember Napa state hospital was mentioned. Trying to determine where and if he was a patient either place. thank you

Your Comment
Hi Stephen, you might find records on Ancestry.com or through this California Department of State Hospital webpage: https://www.dsh.ca.gov/Hospitals/Patient_Information_Requests_FAQs.html

Your Comment
My grandfather, John D. Robertson, was the administrator there in the early 1950s. I would go there for a week or so in the summers to stay with my grandparents. I remember thinking that the "grownups" who worked in their yard and helped in the house were "the nicest grownups I'd ever met." It was years and years later, while recalling the memories of those visits that I realized these people were patients, probably ones who had had shock treatments or were on heavy medications. Regardless, they are remembered as being patient and kind to a lonely little girl.