Community Engagement: What We've Learned From Listening to our Neighbors and Communities (Fall 2022) 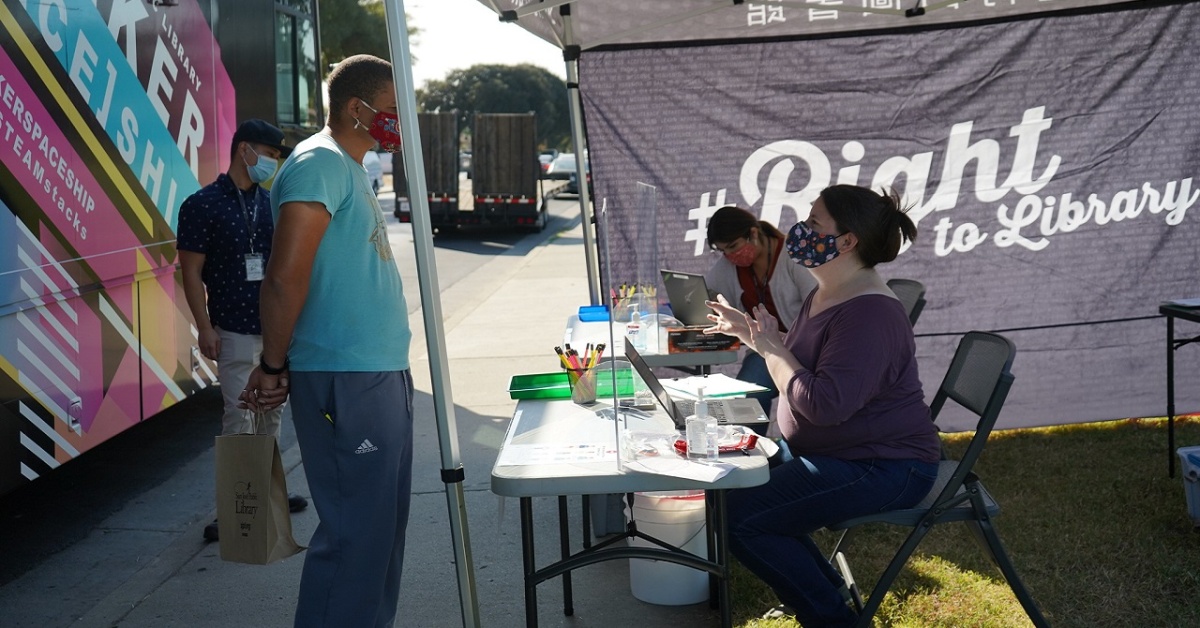 The San Jose Public Library is committed to connecting and listening to San Jose residents. One way we do this is by visiting public events and talking to our residents and neighbors.  What kind of community would you like to live in?  What concerns do you have about your neighborhood? What kind of services and programs would you like to have at the library?  These are the questions we've been asking and we've been learning a lot about the communities we serve.

Seven librarians share what they have been hearing from the community surrounding their libraries. 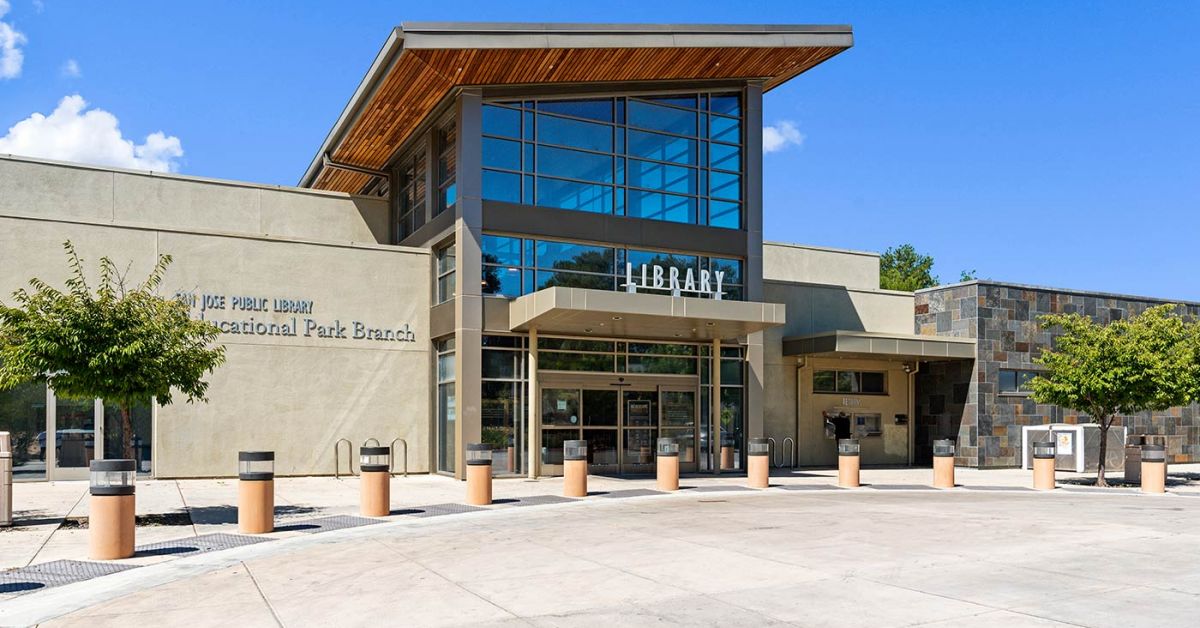 Librarians, Lucy Chiem and Melissa Maglio participated at a National Night Out event at Mayfair Community Center on August 2nd.  While the crowds weren't large, they still had the opportunity to talk to a few community members who were attending the event.

We learned that our communities want to live in a safe and clean city.  They see a lot of trash and they see a lot of unhoused residents that need support.  They are often afraid to walk on the streets with their kids.  They want more community events, like National Night Out where they can feel safe and enjoy the resources their city services provide.  They also said they were grateful for the library for providing books to their young kids and that they didn't realize the library was offering so much.  The hotspot lending and computer lending services that the library now provides was a surprise to many. 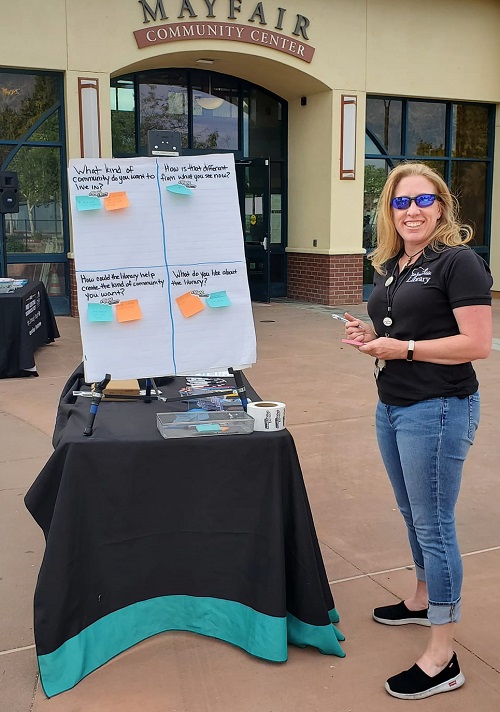 Hearing this from the neighbors encouraged both librarians to think about what type of community events they could offer beyond a smaller, more intimate library program.  Hearing this also supported the belief that if you host the right event, people will come, as earlier in the Summer the Educational Park Library offered an outdoor petting zoo paired with outdoor water play on the library's patio and they hosted over 400 attendees. 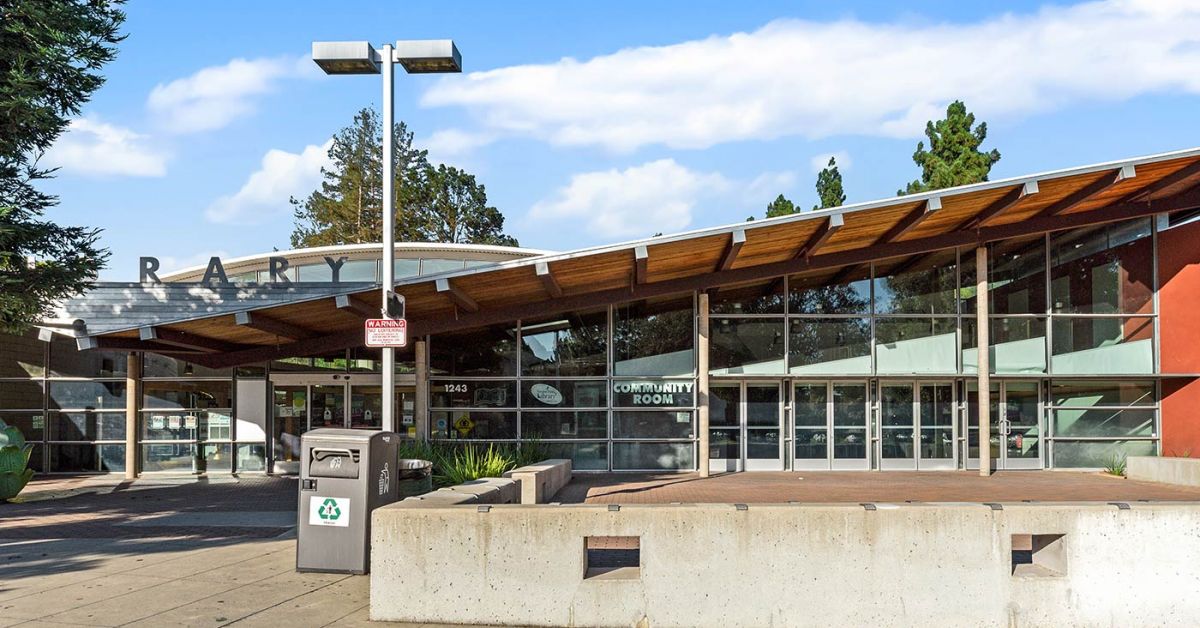 In Aug. and Sept. branch librarian Randall attended several Back to School Night events at Moreland School District elementary schools (Country Lane, Latimer, Payne, Anderson, etc.) as well as a District 1 Leadership Group meeting toward the end of July. At these events, he asked residents to complete a brief survey to help us gain a better understanding of community concerns. In total, he gathered responses from 67 residents. The responses reflected a wide range of concerns about the community, but a few themes emerged as being most important to residents. 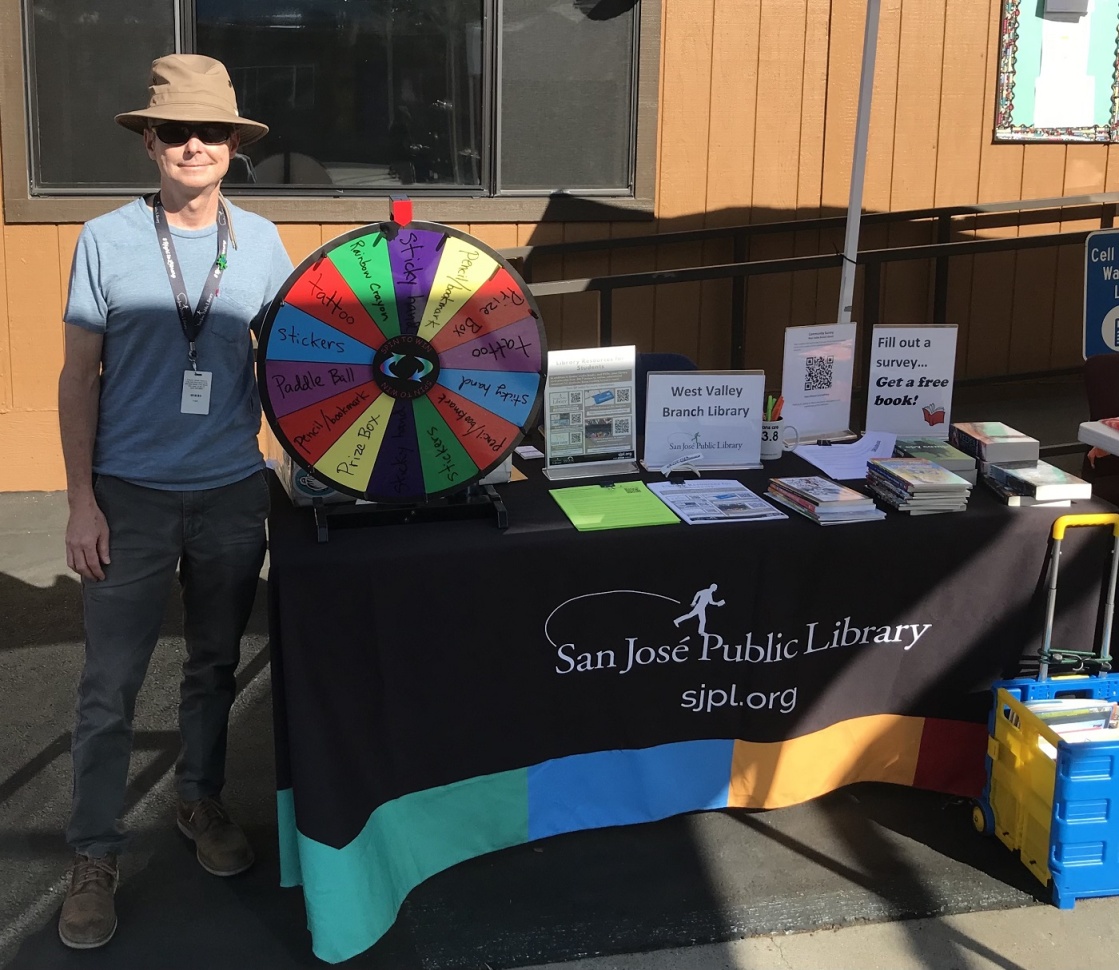 West Valley Branch Librarian Randall works to engage event attendees by asking them if they'd like to spin the prize wheel.

When asked “What kind of community do you want to live in?”, a large percentage of respondents said they wanted a community where people worked together to help each other and create positive change. As one neighborhood resident put it, “I love a close knit community that works together to make the whole community better!” Many residents also expressed a desire for a kind, friendly, and welcoming community. In addition, residents want a community that is safe, diverse, clean, and peaceful with plentiful open spaces and parks. 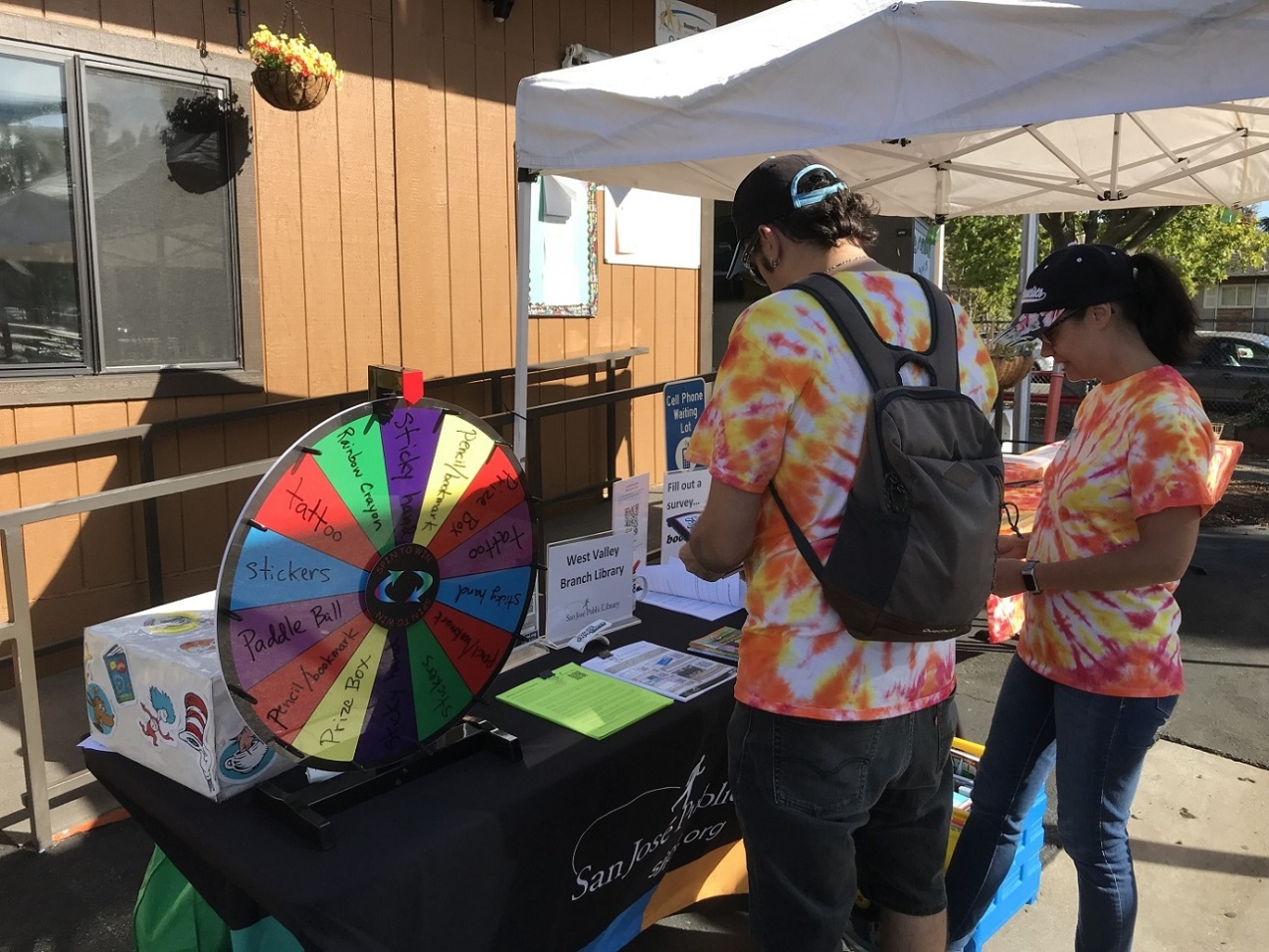 Event attendees spend time checking out the information about the resources available from the library.

In contrast to their ideal community, respondents reported a lack of cohesiveness among residents. Many residents feel isolated and disengaged. “People don’t know their neighbors,” as one resident put it. Residents noted an increase in crime and a corresponding feeling that their neighborhoods are unsafe. Respondents were also concerned about homelessness. 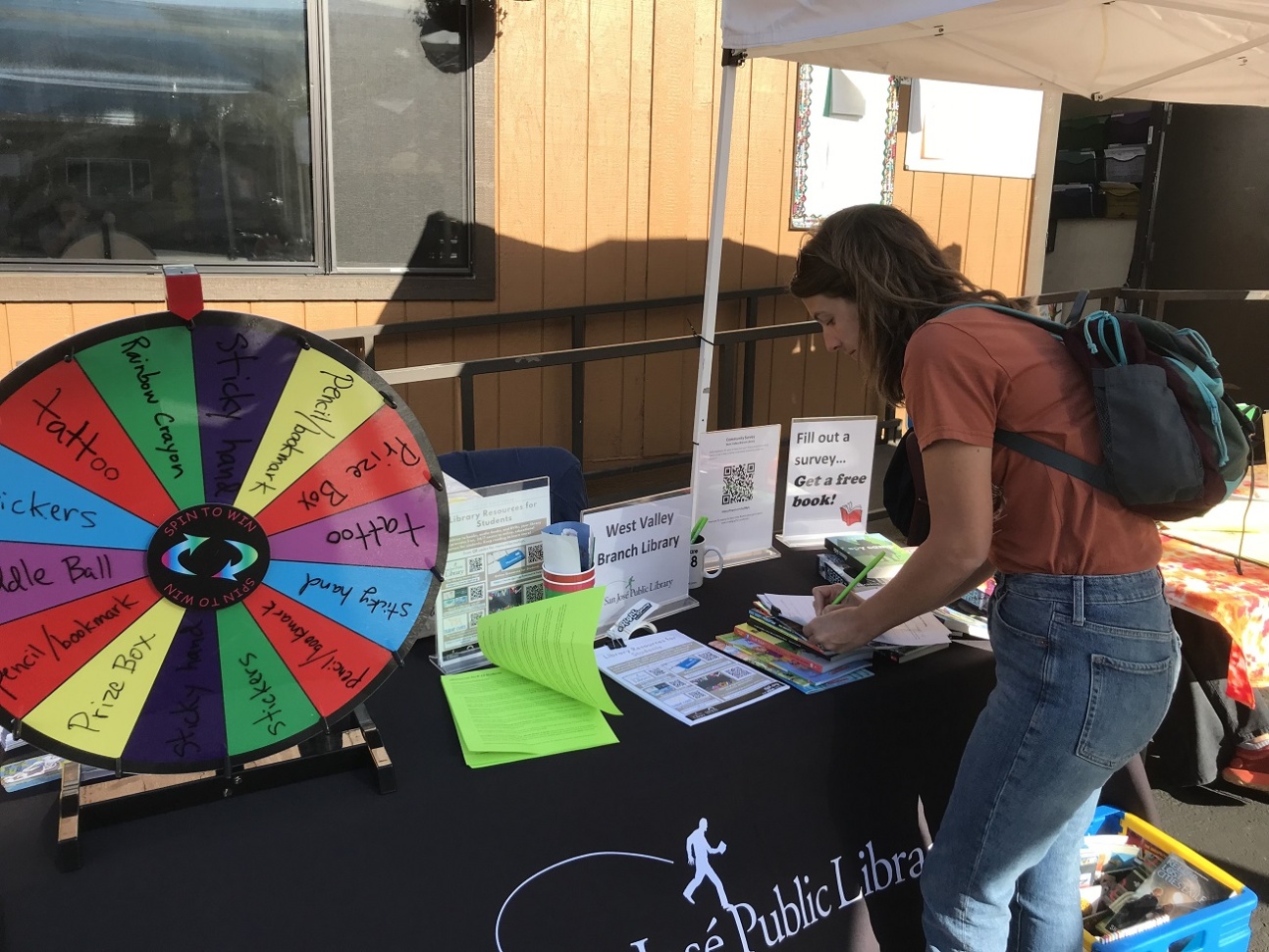 Residents had various suggestions for ways the library might help create the kind of community they wanted. Many want the library to offer more programs, especially programs that promote reading among kids, educational programs, and programs and events that serve to bring the community together and give residents a chance to better know their neighbors. It’s this last recommendation that most closely addresses respondents’ primary concern with community engagement and cohesiveness. Here at West Valley, we want to address this sense of disengagement and isolation among residents and are considering various program ideas to better bring neighborhood residents together. 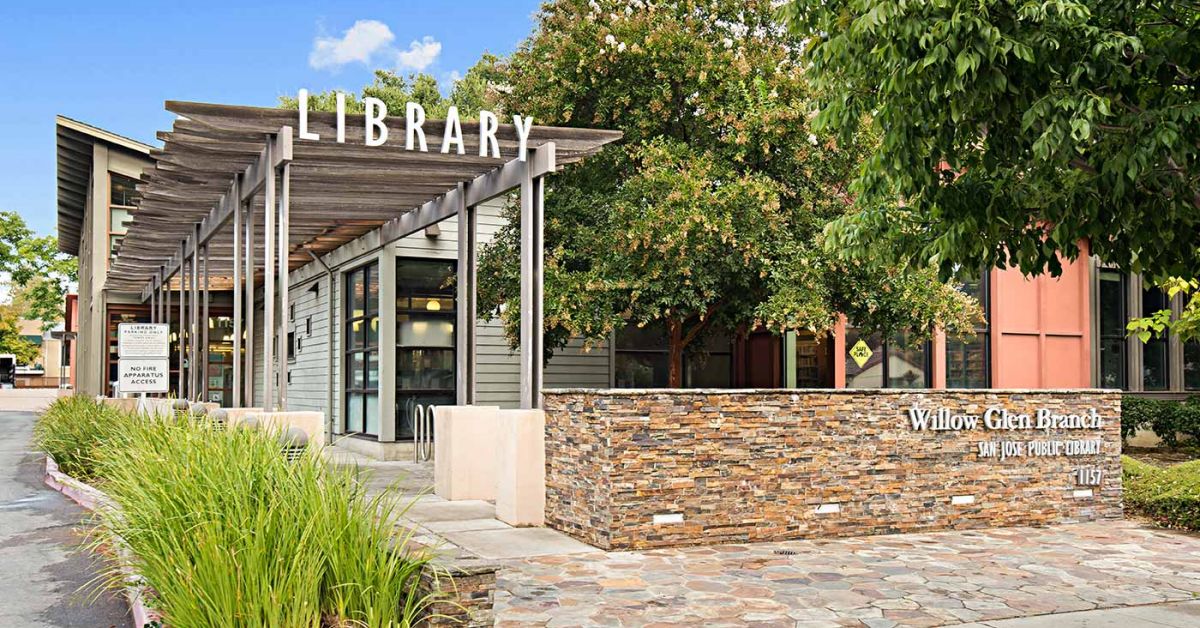 WG attended the Presentation High School Service Fair on 8/25/22 and offered the 4 ASK Questions to the teens who stopped at the library’s table (~200). Only a handful responded. Of those who did respond, most were concerned about the stress and pressure of their everyday lives. Some mentioned the stress coming from the perceived judgment of others for not looking the right way, or not being smart enough, or for things beyond their control. Other pressures came from not being able to keep up with their busy schedules and putting the pressure on themselves.

All wanted their community to be friendly and welcoming and the general consensus was that the library was seen as a place of calm and relaxation. A request for more programming for all ages and interests was expressed, as well as a place to vent their frustrations and have their ideas and thoughts be heard and responded to.

In response to the comments we heard, we will try to add more programming at our branch and possibly create a space for our customers to make suggestions and/or affirmations, that we could also respond to and interact with. We will also look for any programs especially that may address topics like dealing with stress, bullying and time management. 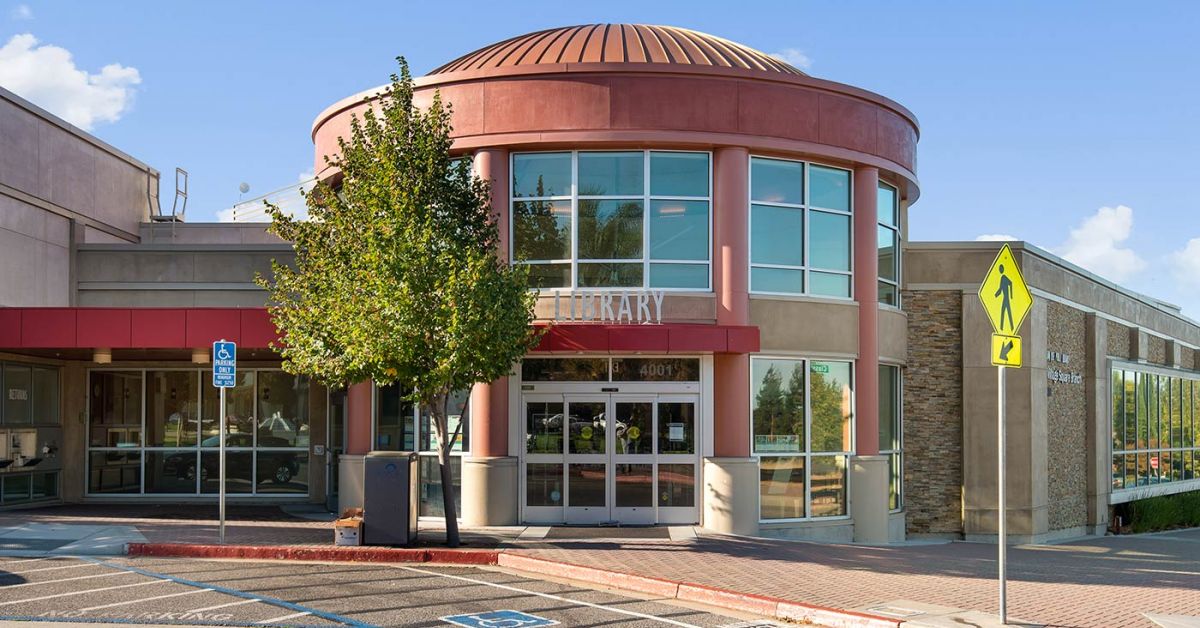 Librarian Binh Tran of VS visited Valle Vista Elementary at Back to School Night on August 15. It was a big crowd and families were excited to be there. It was wonderful to see such a diverse mix of different populations come out and really get involved in our community. Latino and Vietnamese, as well as African-American families were the most numerous in attendance at this event.

Discussions regarding the 4 ASK Questions bring up a variety of hopes, concerns, and aspirations for our community. The dominant theme emerging in these responses, was public safety. More than just the concern about general public safety in the face of rising fears of theft, burglary and violent crime, was the feeling that our community did not feel safe even in the library.

Many cited the unfortunate incident at Hillview library as a major turning point in their sense of safety in general. Respondents also called for more security staff at all library branches. Some parents even went so far as to say they didn’t feel comfortable allowing their children to come to the library anymore.

Beyond immediate security concerns, people also called for more programs for engaging kids after school to keep them off the streets. They firmly believed that the library as an institution made a difference in engaging and guiding young people toward more successful futures, and hoped to see more programs to encourage that trend. Finally, respondents also asked for more help from the city to address issues of housing and traffic. 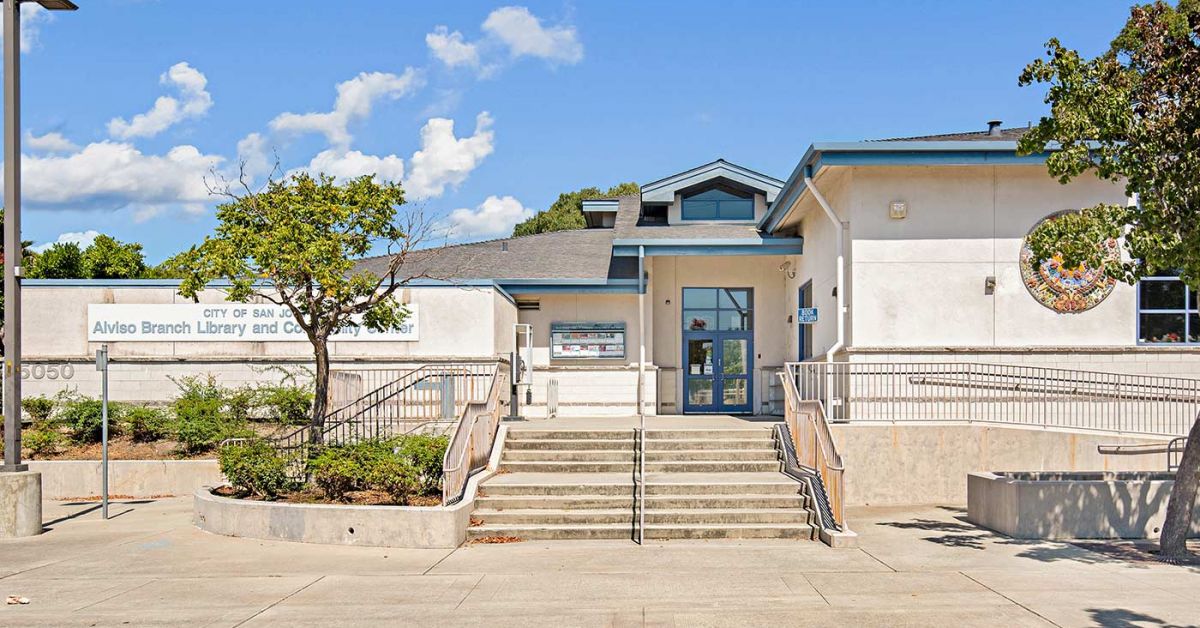 On Saturday October 8th, 2022, Alviso branch library staff attended the Day on the Bay outdoor event held by the Alviso community. This is a major, annual event for the Alviso community and there are many fun activities for attendees such as live music, boat rides, and meeting local organizations. We were able to secure a table for outreach at this event which produced a great turnout. Many event attendees came to our table to try the spin wheel but also shared their gratitude for the library in Alviso. 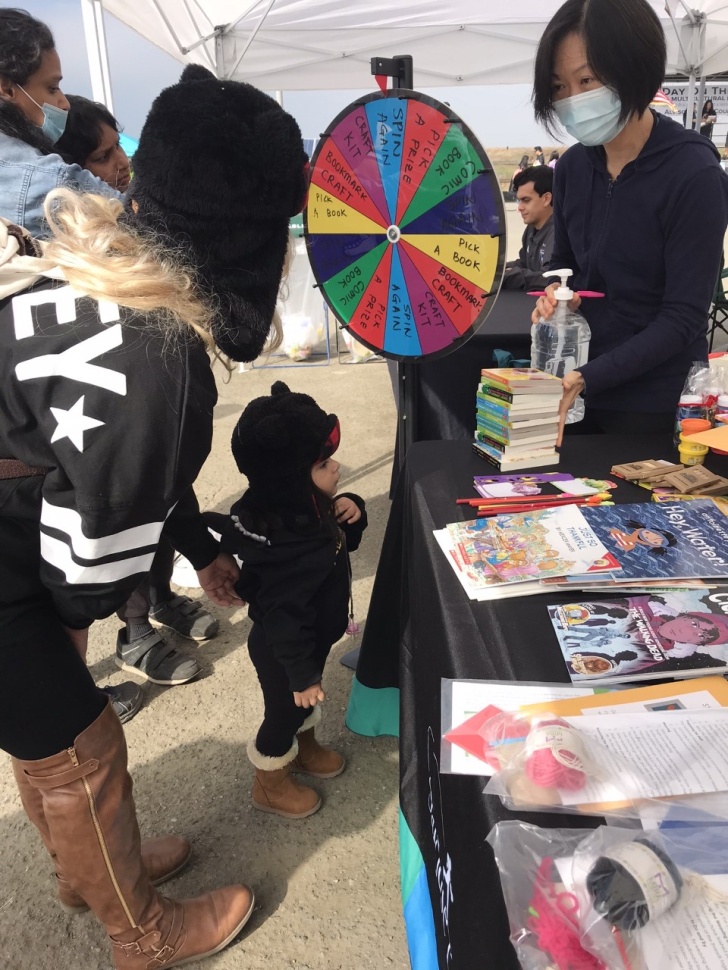 Even the littlest ones came to Alviso Library's table to try the spin wheel.

Staff was able to talk to various attendees and worked the Ask 4 Questions into conversation or simply went over the sheet of questions with them. Based off the responses from people within the Alviso community, many respondents shared that they were eager to attend more community events and want to have more opportunities to meet with their neighbors within Alviso. Some of the respondents said that they would like to see the library host more events throughout the year because other than Day at the Bay which occurs at the end of summer, there is only the Santa Visits events which only occur in December. 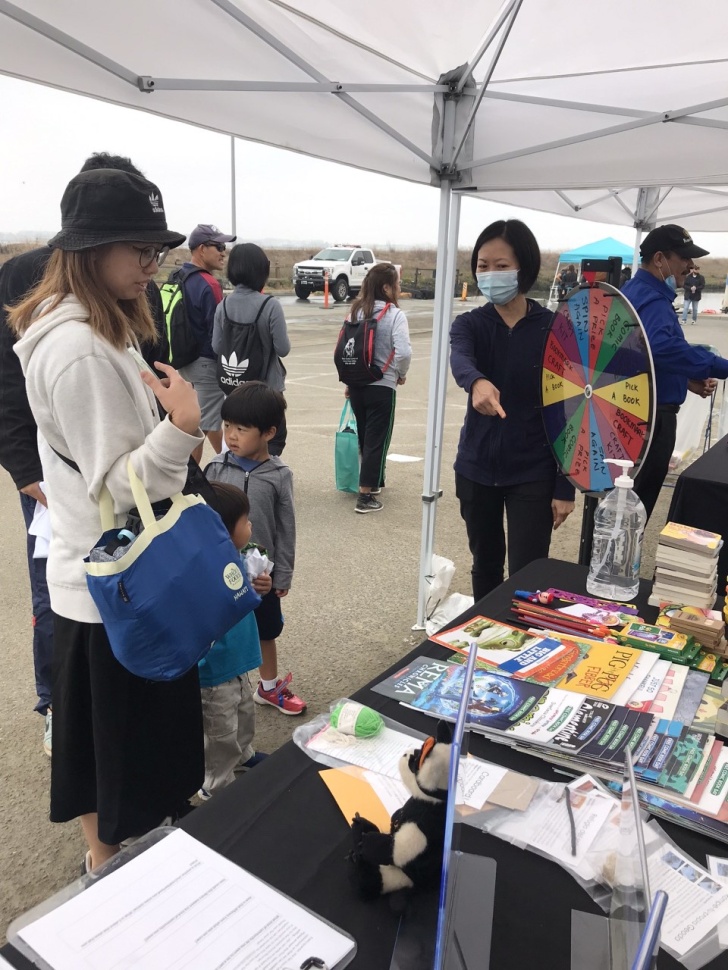 Attendees learn more about the resources Alviso Library has to share with their community.

In addition to wanting more events in Alviso, respondents shared that they would like to see more diversity within the community (i.e. “more youth” was stated in one response). Overall, the community of Alviso is eager to get out and get to know their community more. It is our hope at the Alviso branch to create attractive programming that will bring the community in and provide them various opportunities to meet one-another in the coming year. 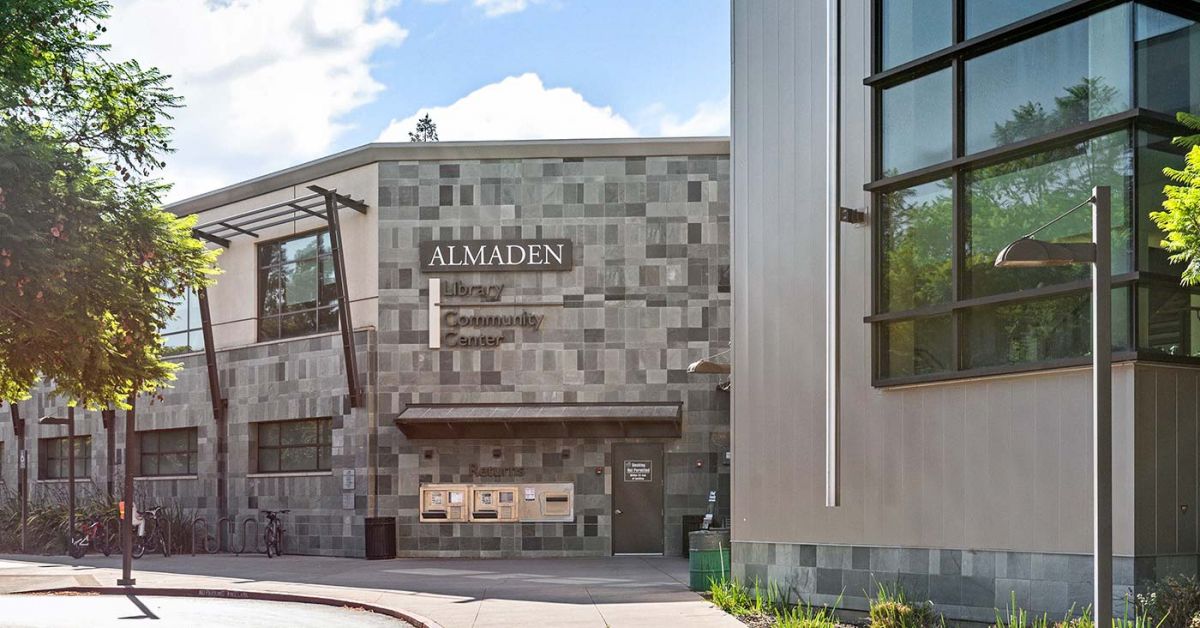 In our last quarter ending in September.  I went out to two back-to-school events in late August.  I went to one elementary school and one middle school in San Jose Unified School District: Simonds and Bret Harte, respectively. 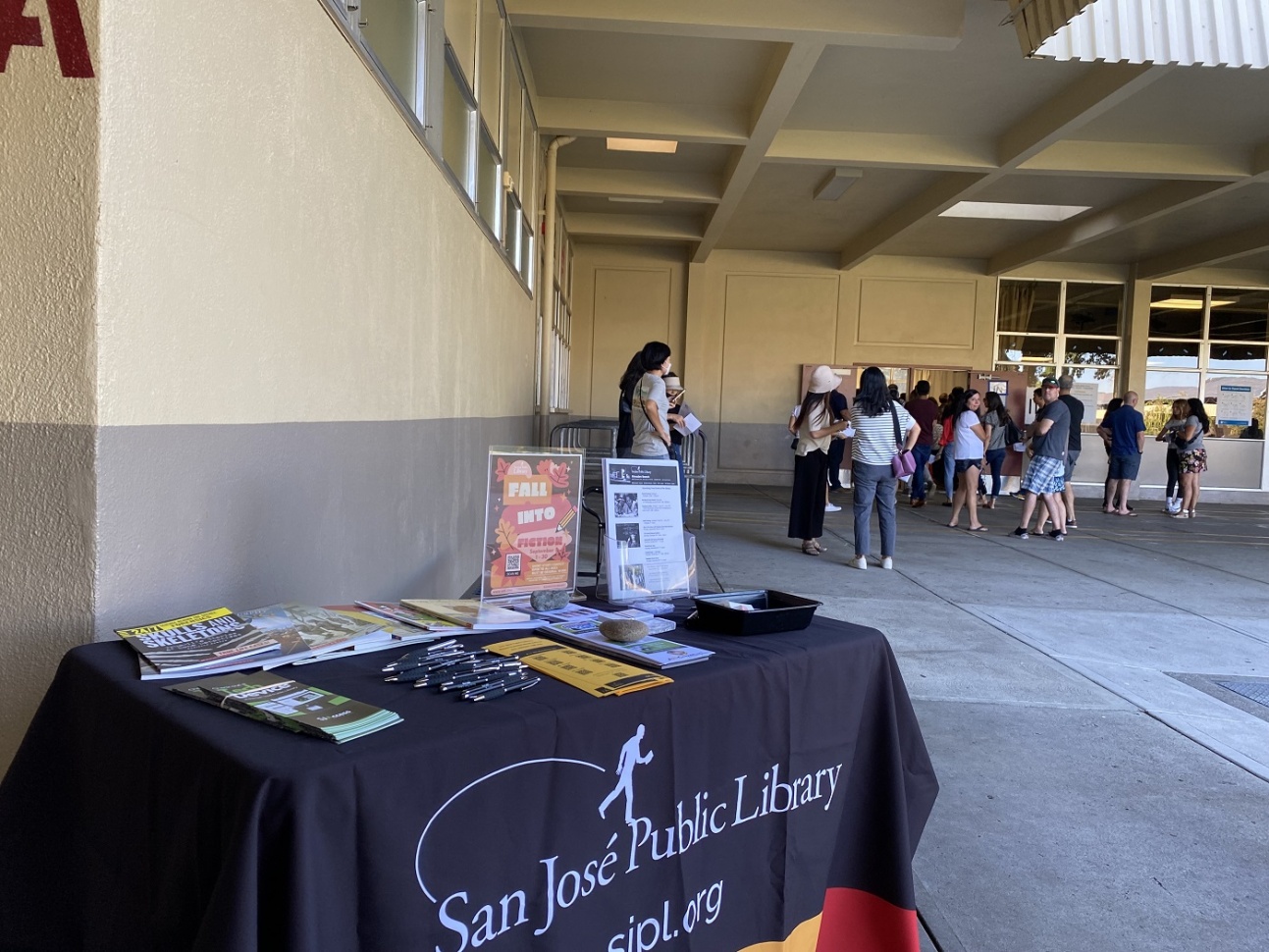 Quiet before the crowdS arrives at the Almaden library's outreach table during back to school night events.

I did not receive much feedback from my back-to-school events.  It was too rushed and too busy.  Parents wanted to find out information about library programs and booklists.  They wanted to pick up flyers or ask questions about services.  The outreach table was swarmed by parents after principal meetings.

Notes from the Almaden Library's bulletin board shows how much the community loves their library.

From the library bulletin board, we received more feedback from the community.  We learned that our community simply loves us.  They loved books.  They wanted more particular titles: Wings of Fire graphic novels, Big Nate.  They wanted more story times, and more open hours.  We received less feedback regarding the first three questions.  My fourth question, “What library programs would you like to see at your branch?” was what most people answered.  I got many responses. 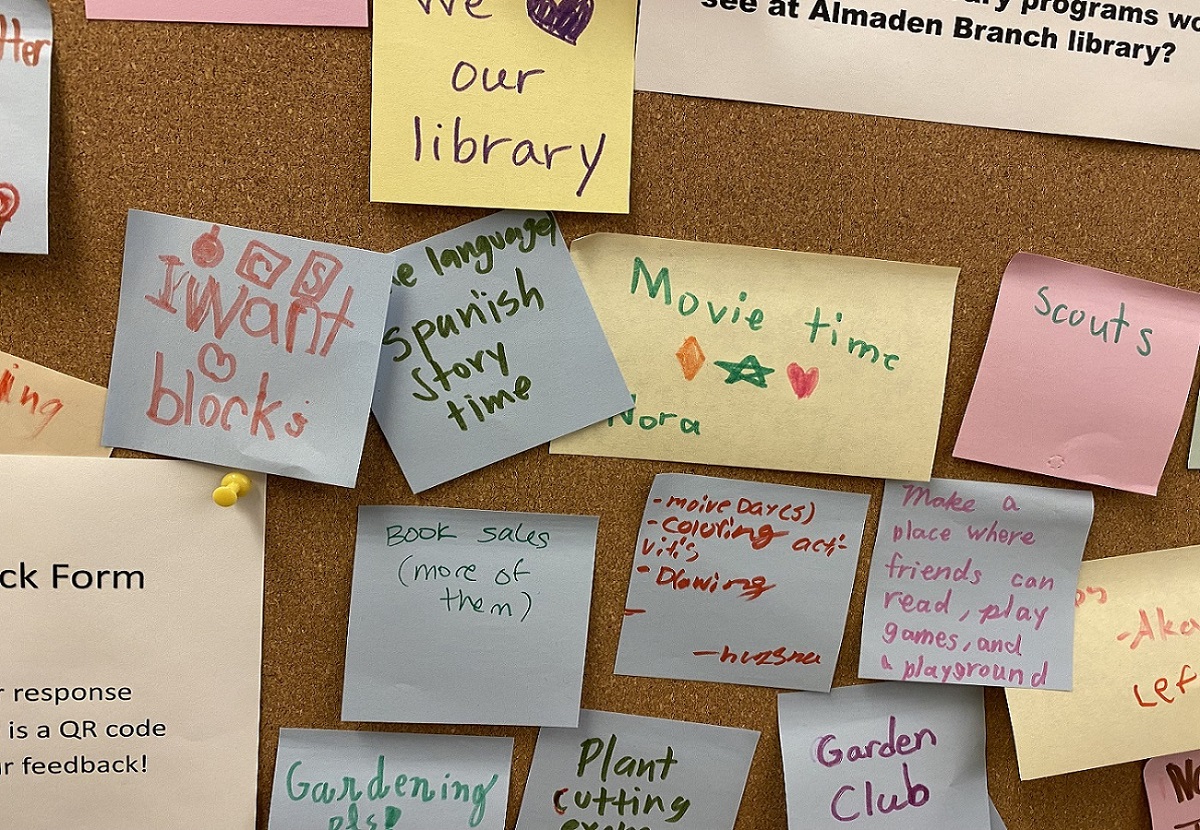 Community members share their thoughts on the services they hope the Almaden Library will provide them.

Some wanted blocks, presumably play toys, activity center for children, Spanish story times, and story times for older children.  We received many requests for gardening club, seed exchange, and cutting exchange.  There was also interest in cooking/food programs. One responded wanting a tweens club; another, workspace for videochat, and another more book sales. Working the Information Desk in August and September, I received questions for ESL programs and programming for seniors.

Answers from the four questions will guide us in our planning for future programs. We plan to incorporate interest in gardening in a garden club and/or gardening programs.  Also, we will be working to bring English Language Learning programs to Almaden, which ended abruptly in February 2020. 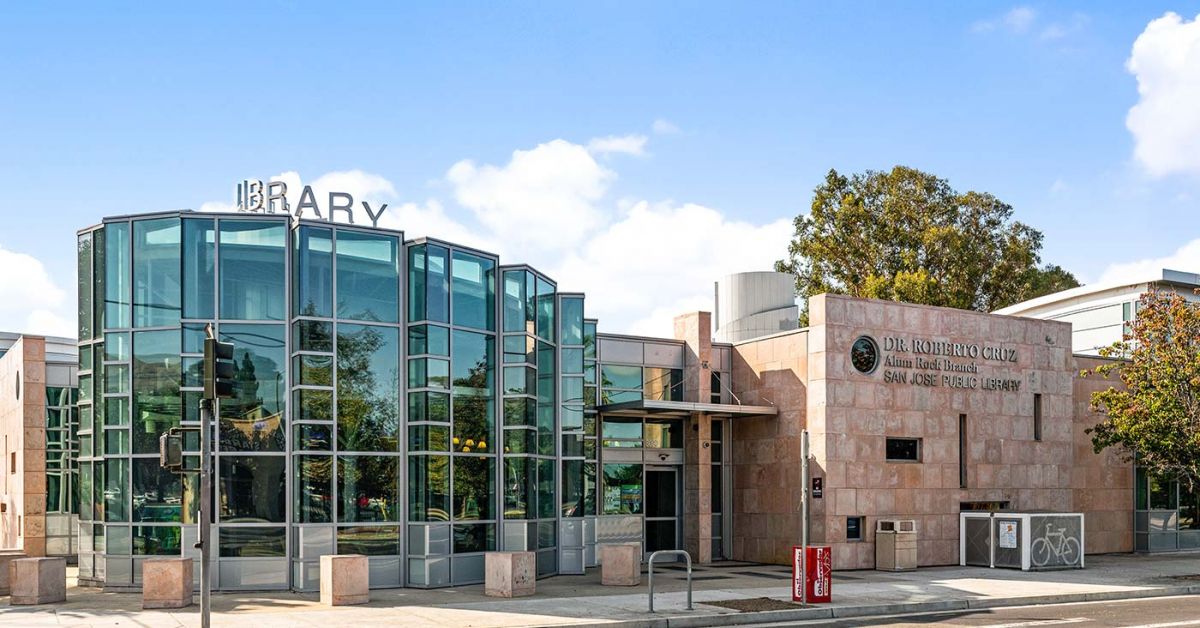 Alum Rock used this quarter of community engagement to focus on parents and children. Survey sheets were distributed at several events with the questions targeted toward parents and families. We asked for input from parents and teens at a Back to School Event at James Lick High School and a Bubble Program for our younger families. 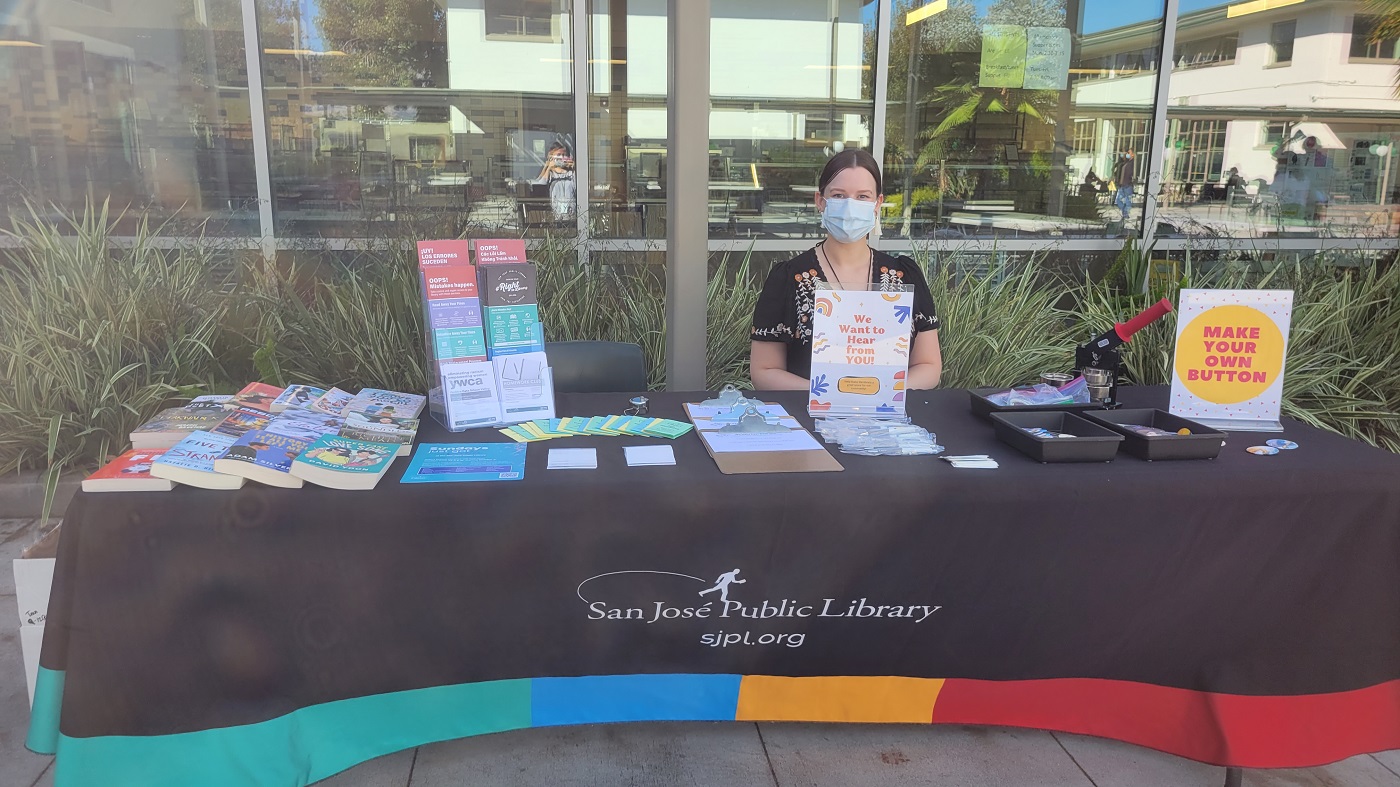 Alum Rock Branch Librarian Jordan is ready to make connections at her back to school night table.

The majority of our respondents wanted to be part of a safe and active community. Many thought that the community could use some clean-up, along with more activities and events to bring the neighborhood together.  Having more community events is definitely a goal that Alum Rock Branch Library can help achieve! That is what libraries are all about! 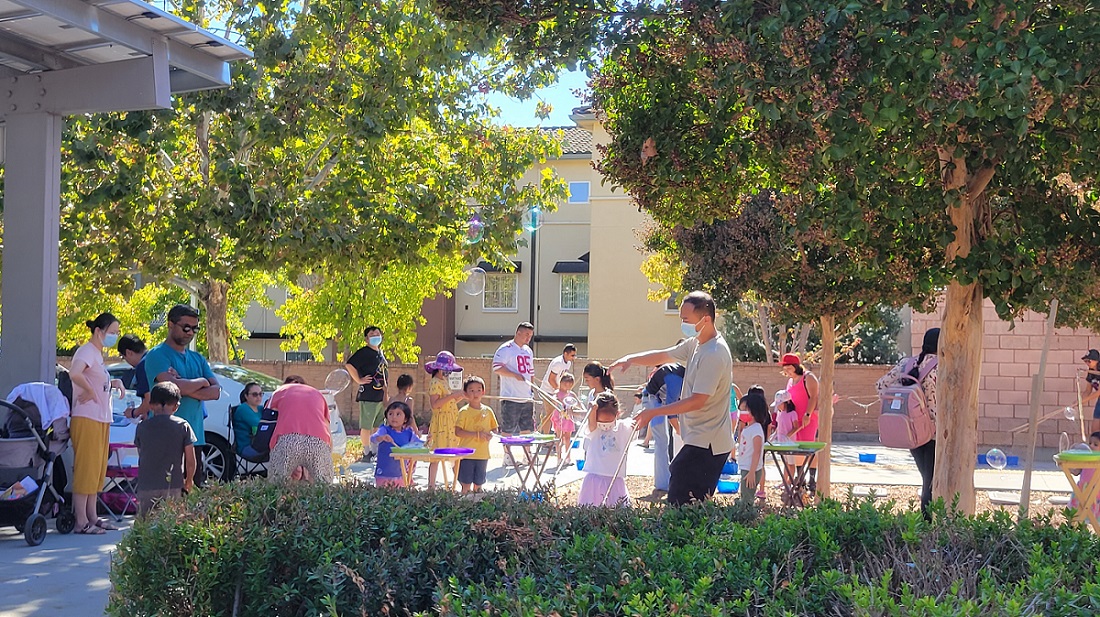 Families at the Alum Rock Library bubble party enjoy getting to know their community of neighbors.

We finished our survey questionnaire asking respondents what they liked most about the library.  Many people wrote that they enjoyed the existing programs and resources available. Here are a few comments:

“It provides a safe space for kids to learn and grow.”