Q&A with YA Author Jennifer A. Nielsen 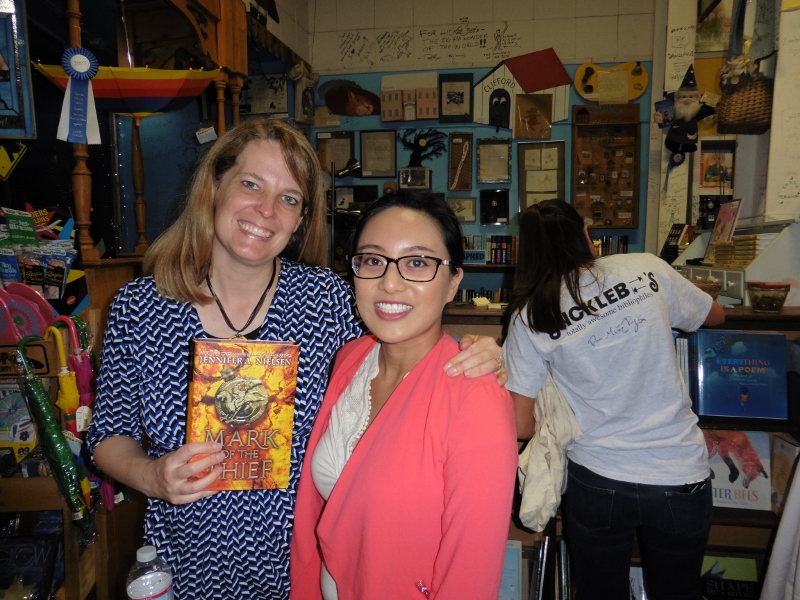 Back in March, I had the amazing opportunity to interview YA author Jennifer A. Nielsen at her event at Hicklebees’s Book Store to promote her newest book, Mark of the Thief, the first book of a planned trilogy. She has written the Ascendance trilogy which consists of The  False Prince, The Runaway King, and The Shadow Throne. I highly recommend this trilogy since it is told from a male’s perspective, which is extremely rare in the YA genre, and the first book alone will leave you reeling from a stunning revelation.  She was extremely nice and after showing me a bulla, a necklace from one of the countless inspirations she had for this book, we proceeded with our interview.

Well I knew that for a long time I wanted to write about a story about someone being forced into impersonating royalty but I didn’t have my hero of the story.  So every time I start writing it, it would fall flat because the story was so weighty that I couldn’t find the right hero to carry it.  So one day I was listening to a song by an artist name Eddie Vedder who’s the lead singer of Pearl Jam. Eddie Vedder did a solo album called Into the Wild, and one of the songs that was on there was called Guaranteed. There was a line in the song: “I knew all the rules/but the rules did not know me”.  That line just stuck in my head and it was such a cool line that I started thinking what kind of character would say a line like that.  From that, Sage began to emerge.  Once I had Sage everything else came into the story.

That’s pretty insane that by listening to music, you created a whole series from a single song lyric.

Well really the whole series kind of came from Sage, it was just a matter of finding what I needed was his attitude, that edge he brings, and I mean the whole point of the line of that song was “ I am not what you expected me to be, you don’t know me, you think you do but you don’t”. That’s where Sage came from.  So it was a very strong foundation.

Were you listening to another type of music when you were writing Mark of the Thief?

Mark of the Thief actually wasn’t inspired musically much, it was inspired more by some of the wonderful trivia about Rome.  There were so many little details that we know about that time and it fascinated me for as little as we know about other cultures that have come since then, we know remarkable detailed things about Rome.  Such as how the sand in the coliseums used to be yellow, and for special events they might crush gems to give it extra sparkle.  That was just a cool thing and that would stick with me and some of the claims that they made about being descendants from gods that stuck with me, and also some of their superstitions and beliefs.  So it really just kind of came from these trivial little details that for a fantasy writer was just kind of fodder to fill in the rest of the story about details we know.

I can also see it in Mark of the Thief also, in regards to superstitions on how even though Julius Caesar passed on 300 years before, you can still see him lurking in different areas in the book.  It’s neat how you were able to transition that and make it your own little spin.

It’s such a fun thing, to take what we know about history and to stay true to all of that, but then to kind of build a sort of subculture with magic within it. I mean that was such a challenge, but a really fun one.

That’s what I like about it. So my last question would be, I don’t know if you notice but there’s been a lot of YA book to movie adaptations going on. If a director were to approach you wanting to make a movie on one of your books, which one would you choose and why?

Well you know Paramount Pictures is looking at False Prince, and I should find out maybe by the end of the summer whether or not they’ll want to make that so that’s been a process for a few years.  I hope that they’ll show some interest in making it.  One that I would really love, aside from that, that I would really love to see to be made into a movie is my next book released. It involves a girl’s attempt to escape from the Berlin Wall, in order to reunite her family. It’s so seeped in history and her desperation to get her family back together again it would be a fun one to see on the big screen.  That one is Night Divided.

When should your readers look for that?

It’s coming out in August.

I know it’s full on crazy, I’m full on crazy.  But when I had the idea, it just would not let go of me so I knew I was going to write it. So insanity aside.

I’m totally going to pre-order that book. And I think they’re ready for your event.

Thank you very much. You do a great job.

From there, I attended her event, which was very inspirational. Not only did she read a chapter out loud from Mark of the Thief, answered questions from the audience and signed books, but she touched on never giving up on your dreams. Jennifer told us that it took her years before she was able to get a publisher, and she said that the amount of rejection letters (which she still keeps to this day to remind her of how far she’s come) that she received, would cover the entire walls of Hicklebees. You can tell that she has such a strong passion for her work that when she visited an elementary school, she met a young boy who wanted to become a baseball player. His teacher told him to pick a more realistic job, since she didn’t believe that he would achieve it. Jennifer took that young boy aside and told him to never give up on what he wants most, and to practice becoming the best baseball player that he can now, so that when he does try out in middle school and high school, he will already have progressed much farther than his teammates. You can tell that the entire audience was captivated  by her story, with everyone literally sitting on the edge of their seat. Jennifer also touched upon how important it is to support your local independent bookstores, saying that these were the places that authors love coming to since each one has their own charm and sense of community.  I highly agree with her, since I only buy my books from Hicklebees because of the extremely friendly staff, and each event that I attend just keeps getting better and better. So thank you Hicklebees, for giving the public a chance to meet their favorite authors from all different genres and letting us fall a little bit more in love with reading.

A HUGE thank you to Jane and Mary Ann at Hicklebees for giving me the opportunity to interview Jennifer A. Nielsen for a few minutes before her event. Words simply cannot explain how thankful I am to you both for making this happen a second time. Also thank you to TAB, for consistently hosting yet another fun event.  When I grow up, I want to be just like you guys.