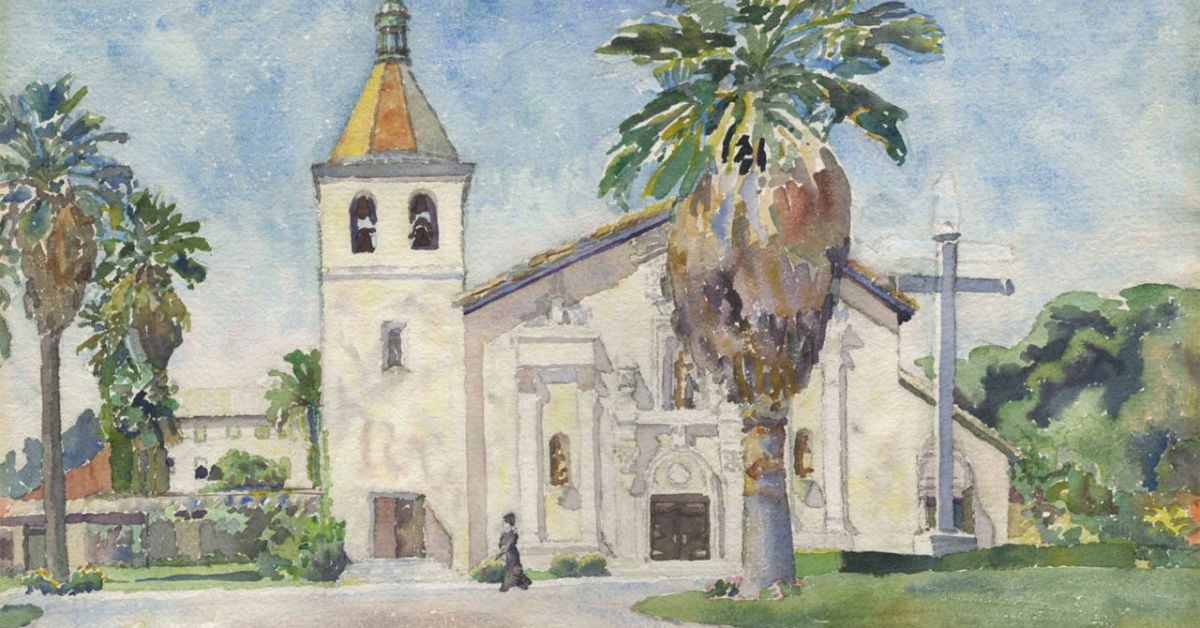 Edith was born on January 2, 1895, the daughter of William S. and Ada Heron of Hostetter Road in the Berryessa community of San José.

Edith graduated from San José High School in 1914. She then attended the all-girls San José Normal School (now known as San José State University), graduating in 1918. Following a short-term teaching career in art therapy she attended the California School of Arts and Crafts in Berkley until 1921.

In the 1920s, Edith taught art therapy through pottery and basketry at the Stockton State Hospital. She also taught weaving and furniture design at the Livermore Sanatorium.

In the summer of 1932, while painting the Carmel Mission, there was some confusion about Edith’s permission to be on Mission grounds. Refusing to leave voluntarily, Edith was escorted from the premises by police. As a result of this incident, all artists were banned from Mission grounds.

In 1935, Edith sent a watercolor painting to Eleanor Roosevelt in appreciation of the First Lady’s social work. The painting depicted one of the Carmel Mission towers. Mrs. Roosevelt sent her a thank you letter. When her father, William, passed in 1935, Heron became the head of the household living with her younger brother Colin, a life insurance agent.

Between 1932-1942, Edith held 12 exhibitions of her watercolor paintings, many in the Bay Area.

Throughout her life Edith traveled extensively (to Mexico, Central America, Canada, and Europe) while maintaining her residence in California; over the years she resided in San Mateo, Pacific Grove, San Francisco, Monterey and San José.

In 1942, Edith continued her art therapy by teaching arts and crafts to Japanese-Americans in the Poston War Relocation Center, and internment camp in Arizona.

By 1968 she was longer producing paintings, but is rumored to have been working on writing and illustrating a children’s book based on Monterey. That year she donated 12 of her watercolor paintings to the San José Public Library at the suggestion of her friend, David McDaniel, a former Commissioner of the San José Library Board. In 1974, she donated 6 paintings to her alma mater, San José State

University. To date, the university has acquired 20 pieces from her watercolor collection, one of which mysteriously disappeared.

In 1976, Edith suffered a stroke and was placed in a convalescent home. Four years later, on March 6, 1980, she passed away at the age of 85. Though she never married, she always remained close to her brother, Colin, who passed away 3 years later.