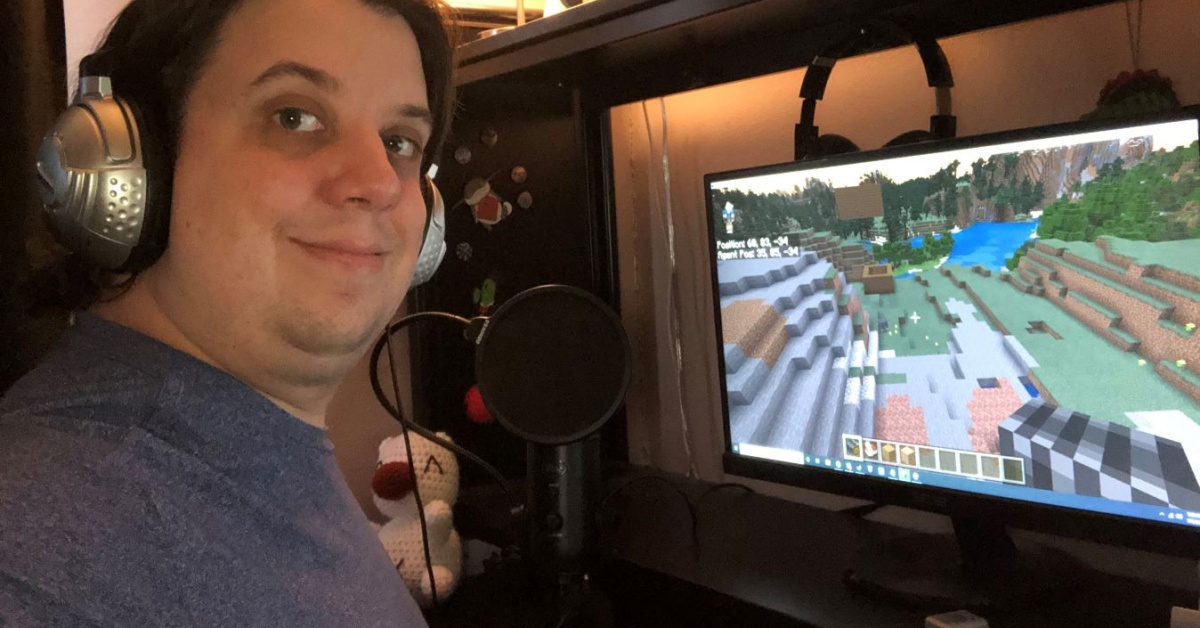 Pathfinder is a series of blogs about intrepid library staff who are leading interesting programs that you may not yet know about.

Librarian Jeff Brenion is someone who you would call an avid “gamer.”  He loves all kinds of games: board, card, table-top Role Playing Games, video, computer, and sports.

He believes “games are a powerful medium for tackling concepts, building social connections, and even modeling the world around us.”

Jeff has an accomplished formal background in games through his academic career.  He studied “game theory,” a branch of mathematics used in his minor, economics.  He defines game theory as follows: “it creates games as models for real-world problems and then explores the best strategies for those games. It really drives home the value of information when you can see how two players will play the same game very differently with different information.”

Minecraft is what is known as a “survival sandbox.”  Sandbox apps are self-contained apps.  In a survival sandbox, the characters are trying their best to fight against the constant threat of the game environment in order to live.  In Minecraft, participants must fight hunger and mobs like the magnificent Ender Dragon!

Minecraft is not a winnable game.  There is no finish line or clear end-point.  Instead, players are in an ongoing state of exploration.

According to GameDesigning.org, Minecraft is the most popular video game of all time, as of 2020.  As a result, many kids are well-versed in the game and are receptive to learning new skills through the game.  One librarian found that the biggest problem he had in running a Minecraft program was that there were too many people who registered for the program!

Pew Research says that 49% of parents of 13-14 year-olds and 32% of parents of 15-17 year-olds talk to their children about appropriate online content, but do not talk to them about cybersecurity.  Generally, kids are learning about security concepts in games like Minecraft when they protect their assets or gear.  However, they are not being taught how to protect their real world assets like their identity.

Using the general concept from this grant, Jeff designed and implemented his own version for the San Jose Public Library.

After an initial round, Jeff discovered a few problems that he feels he has corrected by forming collaborative partnerships with San Jose State University and TrendMicro.  San Jose State University’s Lydia Chan helped to set up Minecraft Education Edition accounts that will allow each attendee to run their own Minecraft game.  To become fully invested in the program, attendees all need individual access to Minecraft.  In addition, TrendMicro, a cybersecurity firm, will help Jeff with the cybersecurity elements of the program.

Jeff is fascinated with the possible educational aspects of games like Minecraft, where students can transfer skills from the gaming world to the real world.  There are innumerable possible uses for gaming platforms in the real world.  For instance, some high schools utilized Minecraft and Roblox (another gaming platform) to hold virtual graduations in 2020. He is certain to apply skills from Minecraft and other games in other library programs.  He certainly has many different kinds of games to choose from in many different platforms!

Parents will learn that playing games like Minecraft often have unnoticed positive effects.  When kids play Minecraft, they are developing a lot of skills involving real world concepts and social interconnections.  Library programs can help kids to make the mental connection between protecting their Minecraft assets and real world assets.  Other gaming skills are also transferable; the possibilities are endless for enthusiastic and invested librarians like Jeff!

As Jeff notes: “one of the things I've found is that if you give kids a space where they can play and explore, they'll come up with solutions you would never even have considered. It turns learning into a collaborative experience - our attendees have knowledge and ideas that I don't have, so giving them a chance to share it (and sometimes, even to decide the direction we'll take!) lets them feel an ownership stake in the program.”

Your Comment
Yes, it sure is! Kids I know have been playing this since elementary school and have continued into their college careers!

Your Comment
Yay you go Jeff! He has such a huge passion for both the gaming and library world and it clearly shows.

Your Comment
I certainly agree! Jeff was truly a pleasure to interview. He is a true gamer: generous in sharing his gaming acumen!