Looking Back: The Day the Buffalo Roamed 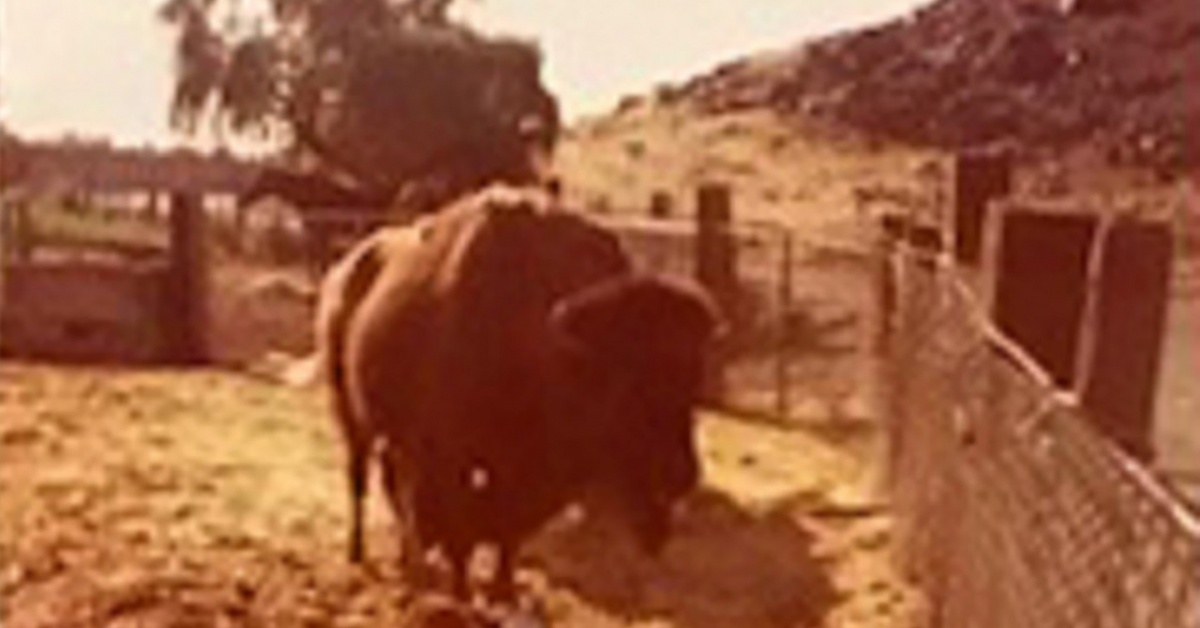 Image:  A buffalo in its pen on the Rubino family ranch near Foxworthy and Almaden. Photo courtesy of Diane Rubino

I was fortunate to have grown up in a pocket of Willow Glen that is located up against the San Juan Bautista Hills (also known as Communications Hill).  The neighborhood lies between the Guadalupe River to the west and the Canoas Creek to the east.  Until the year 2000, the Valley View prune orchard was immediately to our south.  So in the 1960s and 1970s, we had creeks, fields and orchards to play in, grassy hills to slide down on flattened cardboard boxes, trees to build forts in and swing from, as well as old quicksilver mines which a classmate of mine once got lost in.

We also had a large variety of wild animals including rabbits, foxes, coyotes, deer and bats in addition to the possums, raccoons, and skunks that have become frequent visitors in more recent times.  We moved into the neighborhood in November of 1965, transferring from my first grade class at Broadway Elementary to Canoas Elementary.  During my six years at Canoas, other kids would occasionally say that buffalo had once wandered onto the school grounds. 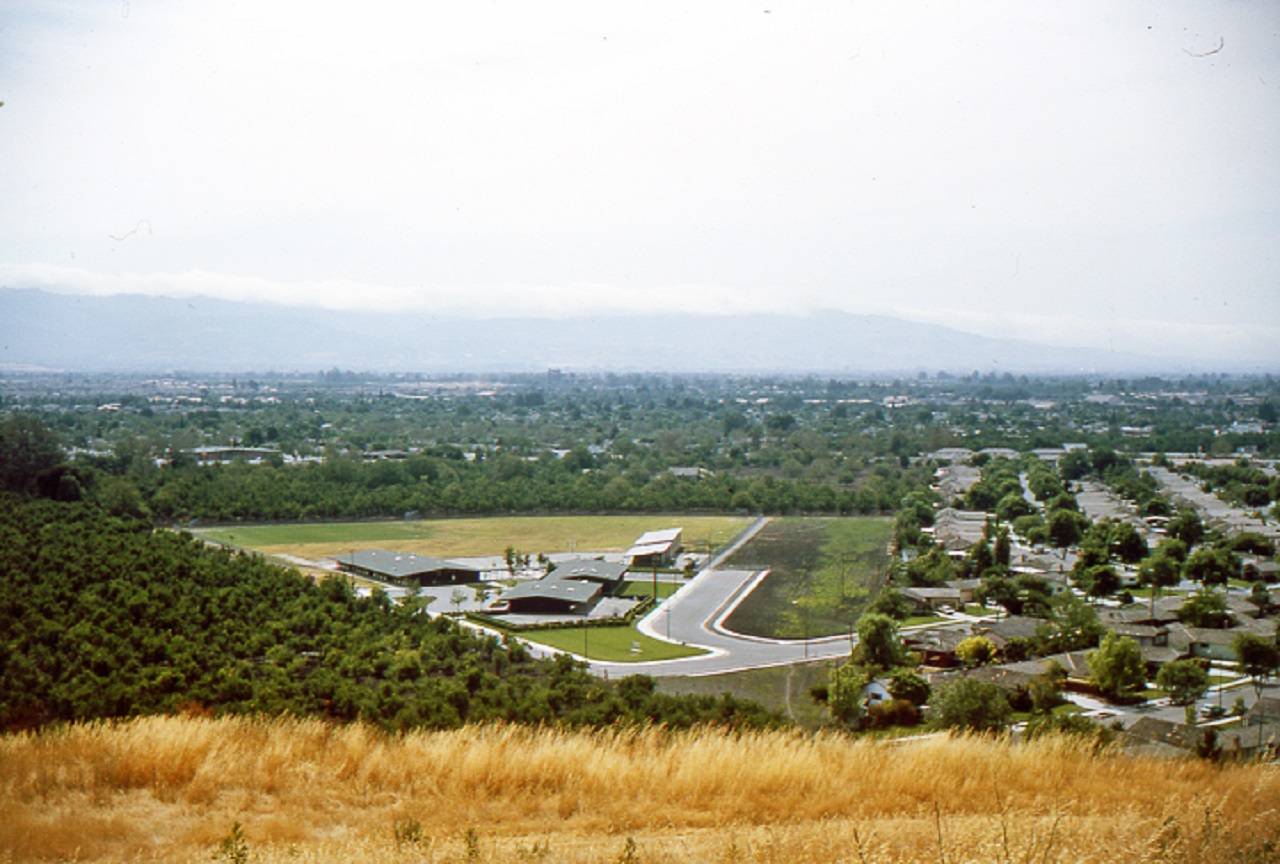 Caption
Image: The newly built Canoas Elementary c.1961. The remaining orchards to the left belonged to Valley View Packing and remained into the late 1990s. Photo by Burt Corsen

Where the Buffalo Roam

I eventually learned that the rumor was true.  Next to the school was an old prune orchard and packing plant named Valley View Packing.  The plant was owned by the Rubino family (Joseph, Sam, and Leonard), and they had a ranch along the hill overlooking the orchard and plant.  In October of 1964, Joseph and Dorothy Rubino, along with their son and daughter Joey and Diane, purchased two buffalo (naming them Samson and Delilah) from the National Bison Range in Moieses, Montana.  Shortly after acquiring the buffalo, they broke out of their corral.  Diane Rubino remembers the day quite well, "At the time, I was just learning about raising buffalo and a couple of them had broken through the fence and were roaming around the orchard...The buffalo did make their way to the school grounds that day."  One of the Canoas Elementary students, Laurie Rosales, recalled, "We had to stay in the classroom, I suppose until the owner was called to remove [them]..."

Diane went on to share the difficulties of raising buffalo, "I think we probably had about 5 or 6 [purebred] buffalo.  They kept on getting pneumonia with our weather in the fall...hot days and cold nights; as they were not used to that type of climate.  I thought it might be easier with our climate to raise beefalo [hybrid between buffalo and domestic cattle], so I started breeding Hereford bulls to cow buffalo.  They don't breed every year, so it was also a challenge." 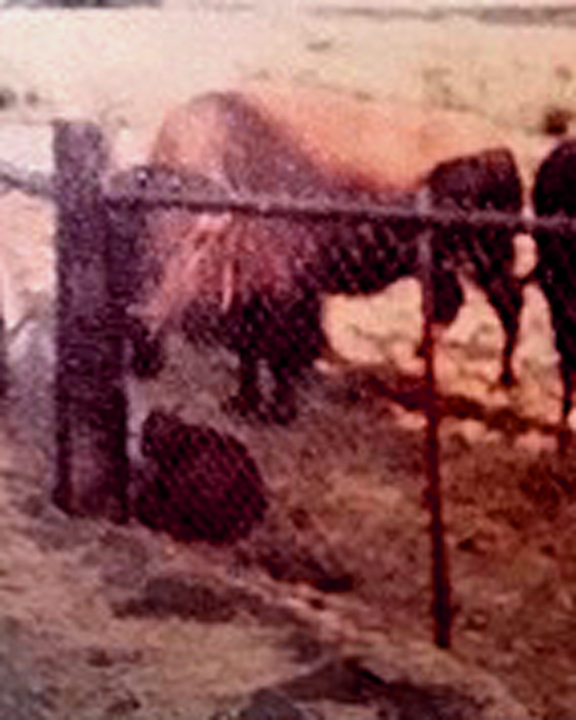 Image: One of the Rubino's buffalo with a calf. Photo courtesy of Diane Rubino

Buffalo are the largest of the native North American animals, with the males weighing about 2,000 pounds and the females weighing about 1,300 pounds.  There were in excess of 60 million buffalo in 1800, and by 1889 there were only 541.  With recovery efforts which were expanded in the mid-1900s, there are roughly 31,000 wild buffalo currently in existence.

When I moved back into the neighborhood in 1992, I decided to take a walk along the Canoas Creek between the old Rubino homestead and the Valley View orchard (now condominiums).  To my surprise, I came to a point where I could see two penned buffalo from across the creek.  When I went back some months later with my camera, they were gone.  I shared this with Diane and she responded, "Yes, 1992 sounds about right.  The last bull may have died and I ended up giving the last cow to Joe Zanger of Casa de Fruta as his buffalo had just died.  He came with a two-horse trailer...and we managed to load her up for him.  I think she died shortly thereafter.  I do miss my buffalo...such a wonderful time... 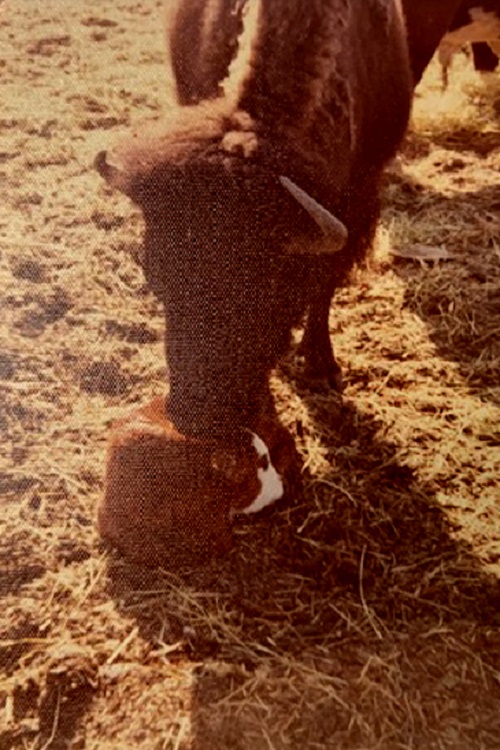 Image: Close-up of one of the Rubino's buffalo with a calf. Photo courtesy of Diane Rubino

What a nice memory

Your Comment
I very much enjoyed reading this story, thank you for sharing. Buffalo are very beautiful to see out in the open. In San Francisco's Golden Gate Park there more than a few that can be viewed from a distance and I seen many up close in Oklahoma at the Joseph H. Williams Tallgrass Prairie Preserve. On the drive in we saw countless buffalo along the road, so drive slow and carefully. There must have been at least 100 hundred too close to our car. The Joseph H. Williams Tallgrass Prairie Preserve website claims to have 2,500 free-ranging bison roaming on their 39,650 acres! In Wyoming at the Terry Bison Ranch Resort during a "train" ride tour we were able to feed and pet the bison. It was fun and everyone went away with all their fingers, I am glad to say.

Your Comment
Glad you enjoyed the post and thanks for letting us know where else we can view buffalo. Very cool that you got to see them up close.