Dedication to a Librarian Who Lived and Breathed Library Service: Margaret Fitch 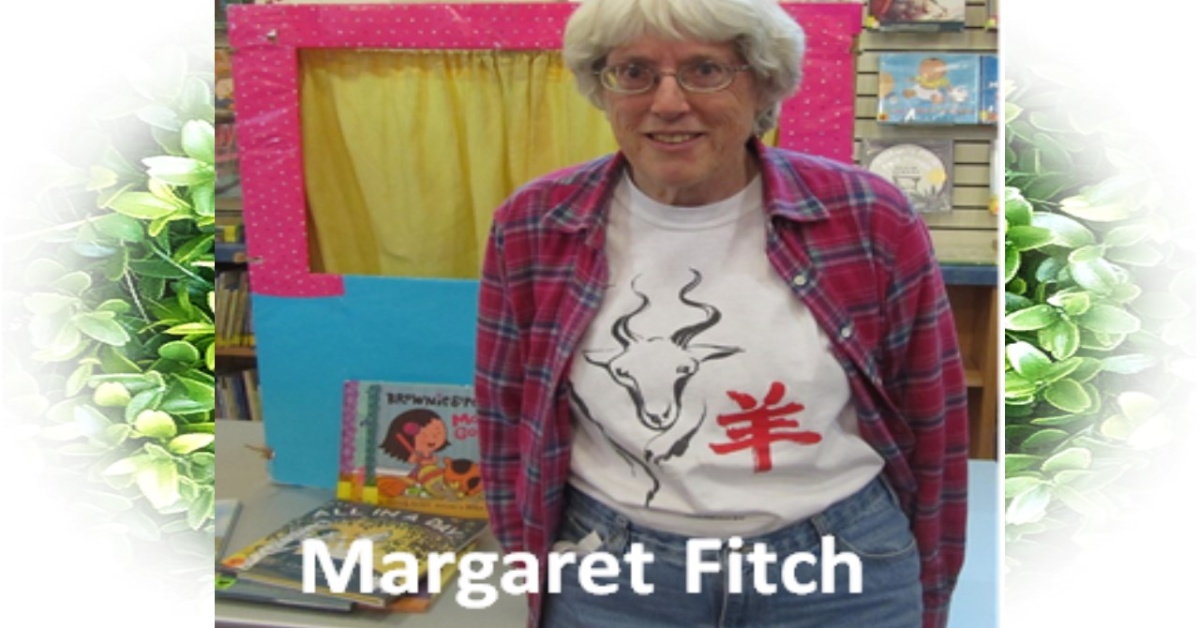 When I think of her, I remember the librarian who would borrow books for kids on her own card because they could not use their own card with high fines (this was before children's cards were fine-free.)  She trusted that they would return the materials.

Though retired, Margaret continued her library service by providing free storytimes and puppet shows to libraries on the East Side of San José and participating in Friends of the Library activities.  When she passed away, her family made librarian Helen Kahn her unofficial "library trustee."  Margaret's accumulated wealth of puppets, books, and other paraphernalia were donated to various grateful institutions who will continue to provide life to her creations and librarianship.

On this day before Thanksgiving, I thought it'd be a nice day to give thanks for her hard work as a librarian.

Here are some highlights of her life, per her family's obituary of her:

She was a great mentor to many librarians at the Library.  One librarian told me about how she truly missed Margaret and all of the help she had given her.

Heartfelt Dedications from a Manager

Oscar Hernandez, who worked with her closely as manager of the East San Jose Carnegie Branch says of her,

“Working in a library is the only career Margaret Fitch ever had, and ever wanted. She enthusiastically and memorably provided the Library with puppet performances. At East Branch, we especially remember her for the dedication and support of our Friends group. Amongst our documents and memorabilia, we would often find decades old pictures & descriptions of events at East San Jose Carnegie that she participated in. And when we showed them to Margaret, she would light up and recall the community that was created through the efforts of the Library staffs with whom she worked. She will be greatly missed and always remembered."

Margaret's mark on others were numerous!

"Students always loved puppet show days, and we even went back to the classroom a few times, and made puppet show stands with tri-fold boards, and they had fun putting on their own puppet shows with my puppets. (I think this will be a fun activity that I will try to reinstate this year as well, now that they are back in the classroom).  She was a great inspiration for my students, and I am sad that later generations won't be able to see her shows." - A teacher who was the recipient of Margaret's puppet shows.

"She was pretty much the only Friend of the Alviso Branch when I joined. She also did a few puppet shows here and I know she was also presenting at other branches. So many children will be able to enjoy the benefits or her dedication to her craft." - A former Alviso librarian.

"She was a great person, a devoted librarian, and a wonderful friend." - A dear friend and librarian.

"She has a heart of gold." - A former librarian.

"She was a lovely person." - A former manager.

"I knew her as a kind and gentle person, well-liked by many others." - A former district supervisor.

"The world is a little bit poorer.  She was so committed to literacy, and such a good story teller." - A former clerk.

"I enjoyed working with Margaret so much.  Such an interesting, kind and caring woman." - A former colleague.

"I knew Margaret for several years when we both worked in East SJ, I as a middle grade teacher. She was such a resource!" - A former community member.

For a video testimonial, you can look at this website: https://beddingfieldfuneralservice.com/obits21.htm.  Hold down both the CTRL and f key at the same time.  This will allow you to search for "Fitch."  Scroll down a little to see the video!

Thank you, Margaret, for all that you provided to the citizens of San José.