Real life thrillers.  Infamous criminals.  In October, I'm always looking for a scary read, and sometimes truth can be scarier than fiction.  These true crime books were written for a teen audience.

True story of the tragic murder of Long Island teen Gary Lauwers by Ricky Kasso in 1984, called a "Satanic Sacrifice" by the international media. The effects of drugs, occultism, and violent crime on the teenagers involved caught the attention of the media, deeply affected the town, and changed the national War on Drugs in the United States.  A murder in a small Long Island town reveals the dark secrets lurking behind the seemingly peaceful façade in this latest installment of the Simon True series. On June 19, 1984, seventeen-year-old Ricky Kasso murdered Gary Lauwers in what local police and the international press dubbed a "Satanic Sacrifice." The murder became the subject of several popular songs, and television specials addressed the issue of whether or not America's teens were practicing Satanism. Even Congress got in on the act, debating Satanic symbolism in songs by performers like AC/DC and Ozzy Osbourne. "The country is in crisis!" screamed the pundits. After all, it was the height of the Reagan era and Nancy Reagan's "just say no" campaign was everywhere. But what this case revealed were bigger problems lurking at the heart of suburban America.

In 1892, America was obsessed with a teenage murderess, but it wasn't her crime that shocked the nation--it was her motivation. Nineteen-year-old Alice Mitchell had planned to pass as a man in order to marry her seventeen-year-old fiancée Freda Ward, but when their love letters were discovered, they were forbidden from ever speaking again. Freda adjusted to this fate with an ease that stunned a heartbroken Alice. Her desperation grew with each unanswered letter--and her father's razor soon went missing. On January 25, Alice publicly slashed her ex-fiancée's throat. Her same-sex love was deemed insane by her father that very night, and medical experts agreed: This was a dangerous and incurable perversion. As the courtroom was expanded to accommodate national interest, Alice spent months in jail--including the night that three of her fellow prisoners were lynched (an event which captured the attention of journalist and civil rights activist Ida B. Wells). After a jury of "the finest men in Memphis" declared Alice insane, she was remanded to an asylum, where she died under mysterious circumstances just a few years later. Alice + Freda Forever recounts this tragic, real-life love story with over 100 illustrated love letters, maps, artifacts, historical documents, newspaper articles, courtroom proceedings, and intimate, domestic scenes--painting a vivid picture of a sadly familiar world.

Real stories. Real teens. Real consequences. An innocent teen becomes a hostage stuck in the middle of a dangerous drug-fueled feud in this third book in the chilling Simon True series. On Sunday, August 6, 2000, fifteen-year-old Nick Markowitz was grabbed off the street on the orders of a local drug dealer named Jesse James Hollywood. Nick was taken as collateral because his brother Ben owed Jesse money. He was an innocent victim who became a pawn in an increasingly high-stakes feud between the two that ended with Nick's brutal murder. A dozen or more people saw Nick over the course of the next fifty-nine hours, but no one stepped forward to say anything. No one thought to report the crime to the police. Some of them were scared of Hollywood, while others simply didn't want to get involved. When the news of Nick's murder finally broke, they all had to confront what they'd done-or hadn't done. As for Hollywood, he ordered the hit, but he wasn't actually there when the murder took place. And once the story came to light, he immediately disappeared and remained a fugitive on the FBI's Most Wanted List for nearly six years before his eventual capture.

It's 1971 in Coronado, a small southern California beach town. For seventeen-year-old Eddie Otero, a skilled waterman and avid surfer, life is simple. Then a friend makes him an offer: Swim an illicit package across the border from Mexico. The intense workout is dangerous. Thrilling. Lucrative. And the beginning of a small business. When the young entrepreneurs involve their former high school Spanish teacher, the smuggling adventure grows into a one hundred million dollar global operation. Soon they become fugitives. Living on the edge, they vow to return to their normal lives--right after one last run. 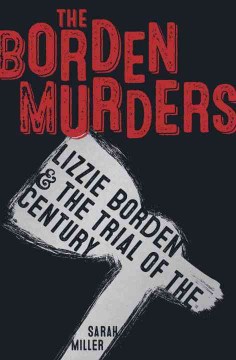 The Borden Murders: Lizzie Borden & the Trial of the Century Sarah Elizabeth Miller

Examines the Borden murders, using newspaper articles to recreate the events and the trial and acquittal of Lizzie Borden and exploring Lizzie's story to theorize on what may have happened.

Looks at one of history's most infamous serial killers known for committing gruesome murders in the late nineteenth-century who remains one of the world's most notorious criminals.

Real stories. Real teens. Real crimes. A backyard brawl turned media circus filled with gang accusations turns a small, quiet town upside down in this second book in the new Simon True series. On May 22, 1995 at 7 p.m. sixteen-year-old Jimmy Farris and seventeen-year-old Mike McLoren were working out outside Mike's backyard fort. Four boys hopped the fence, and a fight broke out inside the dark fort made of two-by-four planks and tarps. Within minutes, both Mike and Jimmy had been stabbed. Jimmy died a short time later. While neighbors knew that the fort was a local hangout where drugs were available, the prosecution depicted the four defendants as gang members, and the crime as gang related. The accusations created a media circus, and added fuel to the growing belief that this affluent, safe, all-white neighborhood was in danger of a full-blown gang war. Four boys stood trial. All four boys faced life sentences.

Your Comment
Thanks for the recommendations! They look spooky good! :)