The other day I was on the light rail. As the train slowed down to stop at the Paseo de San Antonio station, I saw through the window a pair of small statues. I asked myself, “I wonder who made that?” So, I got off the train to take a better look. 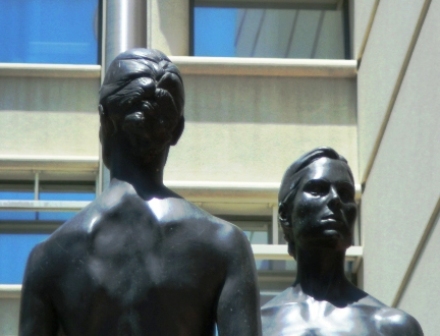 "The Fountain Figure" by Robert Graham is located in front of the Robert F. Peckham Federal Building on First Street. The sculpture is cast bronze. The 2 figures are 3 feet tall and looking over each others shoulder. The figures are on a 5 foot pedestal so you might not see them as you walk by. When the statue was installed in 1986, it had a small fountain to discourage people from touching it. 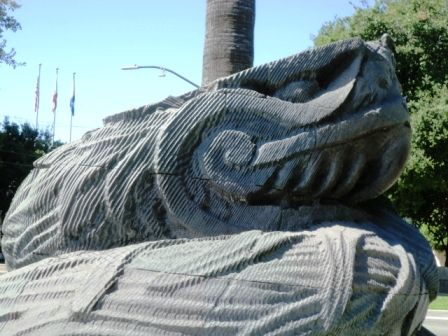 Robert Graham was born in Mexico City in 1938. He studied at San Jose State University and graduated from San Francisco Art Institute. Did you know he was married to actress Angelica Huston?

Before his death in 2008, he did several well-known monuments including the 1984 Olympic Gateway in Los Angles; the Joe Louis Memorial in Detroit; and the Duke Ellington Memorial in Central Park in New York City. If you want to learn more about the sculptor, check out the San Jose Public Library’s database called Biography in Context.

Further Reading on His Artwork

There are also articles from the San Jose Mercury News (Newsbank 1985 - Present) database. However, the database does not provide photos with the articles. If you want to see the photos, check our microfilm collection or the newspaper Clipping Files in the California Room at the Dr. Martin Luther King, Jr. Library.

If you happen to be in downtown San Jose, take a look around at our public art.