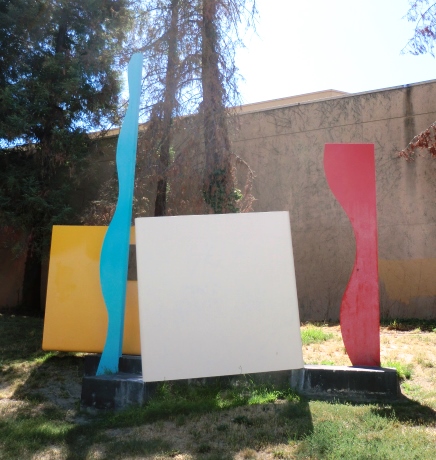 Dedicated in 1989, David Bottini’sculpture, Civic Stage Set, is located on Park Avenue between Almaden Boulevard and Market Street near the Tech Museum.  It is a geometric abstract sculpture made of painted steel.

To tell the story of how the city of San José got Civic Stage Set, I’d have to tell you about the fate of Bottini’s previous sculpture, Great Planes Study VII.

In April 1986, a city employee on his way to lunch walked past the construction zone of the Fairmont Hotel and noticed something was missing - a 20-foot tall, 3½ ton red, white, blue and black painted abstract sculpture! 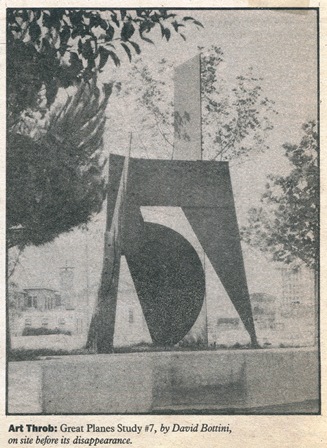 That sculpture was Great Planes Study VII.  It was the first work of public art purchased by the city of San José in 1976 for $5,000.

According to the newspapers, different San José agencies pointed fingers as to who was to blame for the sculptures disappearance.

It started with a misunderstanding.  A letter was sent to the San José Museum of Art to move the sculpture before the ground breaking of the Fairmont Hotel in September 1985.  The museum mistakenly moved their own sculpture, Zurich Space Eye by Willi Gutmann, instead of Great Planes Study VII.

In September, the construction company tried to move Great Planes Study VII, damaging it beyond repair and then scrapping it.

No one noticed that the sculpture was missing for 8 months.

No one had notified the artist that his sculpture was going to be moved, let alone destroyed; Bottini found out by reading the newspaper.  The artist could have sued the city under the 1980 California Art Preservation Act, which empowers artists to sue if their works are damaged or destroyed.  But he didn’t.

Apologies were made to the artist and San José bought Civic Stage Set for $25,000.  New regulations were set by San José Fine Arts Commission so that something like this will never, ever, EVER happen again.

Relevant articles can be found in the San Jose Mercury News (Newsbank 1985 – Present) database.  However, the database does not provide photos.  If you want to see the photos, check the microfilm collection or the newspaper Clipping Files available in the California Room at the Dr. Martin Luther King, Jr. Library.

In the San Jose Mercury News:

In the California Room Clipping Files:

If you happen to be in downtown San Jose, take a walk around town and look at our public art.