Looking Back: The Mission Bells Along the El Camino Real 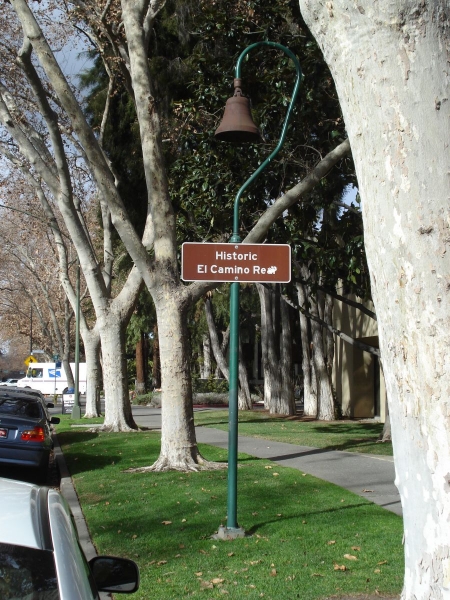 Growing up in the 1960s and 1970s, I was curious about the green bell poles that you occasionally see alongside our roadways.  I got to thinking about them recently, and decided to research them a little.  It turns out that they mark roadways that are generally considered to be a part of the original El Camino Real, or "Royal Road" (California Historical Landmark #784).

The El Camino Real began as a footpath to connect a series of twenty-one Spanish missions (from San Diego to Solano), two pueblos (San Jose and Los Angeles), and four presidios (military forts and seats of government) in San Diego, Santa Barbara, Monterey, and San Francisco.  With the building of the last mission in Sonoma County, the footpath gradually became a roadway.  It’s interesting to note though, that the actual route changed over time.  According to Wikipedia, an unpaved portion of the original road has been preserved near Mission San Juan Bautista in nearby San Juan Bautista.

One of the primary routes representing the El Camino Real is U.S. Route 101 from Los Angeles to San Jose, and then from San Francisco to Novato.  Interstate 5 from the Mexico border to Anaheim and State Route 82 from San Jose to San Francisco are also recognized as part of the modern route by the California State Legislature.  In San Jose, Monterey Highway (which becomes First Street), and The Alameda (which becomes the El Camino Real) are considered part of the roadway.

The creation of the mission bells that we see marking these roadways, were part of an effort to preserve the historic route.  The idea was first proposed by Anna Pitcher, Director of the Pasadena Art Exhibition Association of the Women’s Club of Los Angeles in 1892.  The project finally came to fruition with the placement of the first bell in front of the Old Plaza Church in downtown Los Angeles in 1906.  The markers were designed and manufactured by Mrs. A.S.C. Forbes with a cast iron bell that hung from an eleven-foot bent guidepost.

I wanted to see if I could find one of the bell markers to take a picture of for this posting.  Knowing that The Alameda is considered part of the route, I went onto Google Maps to take a virtual tour down the street and see if I could spot any.  I found two across from each other very close to Singletary Avenue, the street that has those brick archways that say "Hester Park."   I later discovered that the first bell to be placed in Northern California was just down the street, on The Alameda and Morris Avenue, which later became Vermont Avenue.  The corner of The Alameda and Vermont is now basically a triangular island between The Alameda and the onramp to 880.  The bell was placed and dedicated under the auspices of the Santa Clara Women’s Club on May 25, 1909.

Since 1974, Caltrans has been in charge of the maintenance of the bells. The bells measure 18 inches in diameter, weigh about 85 pounds, and cost about $2,700.00 each.