A Home Defender of the High Sierra

The Turkey Vulture (Cathartes aura) is the most widely found, in number and range, of all scavenging birds of prey.  They occur only in the new World, found north to Canada and south to the tip of South America.  The scientific name for Turkey Vulture, Cathartes aura, can be translated in two ways. Both take the first part from the greek "katharsis" meaning to purify or to cleanse. One meaning takes aura to derive from the latin "aureus" or golden, translating to "golden purifier". The other derives from the greek "aura", or breeze, translating to "cleansing breeze". Vultures are fascinating birds that play a critical role in all of our land-based ecosystems.

In North America, we have three species of vultures:

Diversity increases moving to South America, which is home to the Andean Condor, King Vulture, and the Lesser and Greater Yellow-headed Vultures. 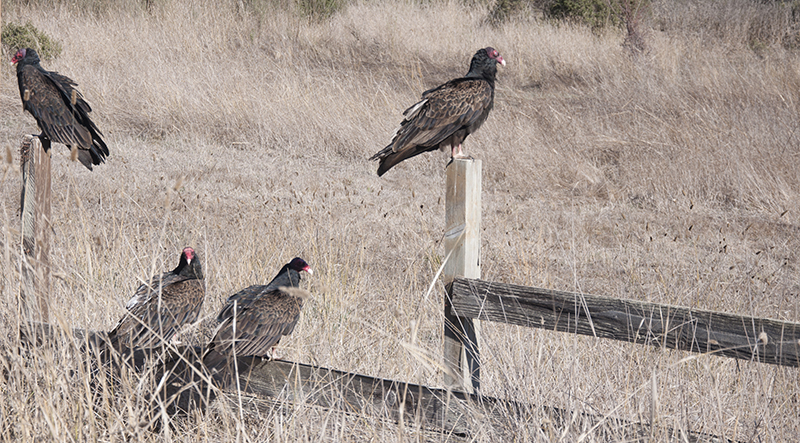 Turkey vultures are unique in their very strong sense of smell, along with excellent vision. This allows them to locate food by scent that other vultures cannot see in wooded areas underneath the tree canopy. They are also unusual in their nesting habits. They nest in the trunks of trees unlike other large birds who build open nests high up in tall trees. The nesting cavities are vertical tubes in the tree trunks that drop down as much as 13 feet from the entrance to the ground. After the chicks hatch, the parents drop into the cavity five or six times a day to feed their young.

In the late Pleistocene Epoch, about 40,000 years ago, California Condors were found throughout North America. Giant mammals roamed the continent, providing a reliable food supply for the birds with a wingspan of nine and a half feet and weighing up to 30 pounds. By the 1980s, only 22 remained in the wild, prompting the U.S. Fish and Wildlife Service to take the step of removing the entire population from the wild and placing them in a captive-breeding program to save them from extinction.

The decline of the condor was all man-induced. The megafauna are wiped out by early Ice Age humans, so the condors have to feed on marine carcasses along the coast. Then people come over again and killed seals, whales and sea lions, so the condors had to feed on cattle. Then we change our ranching practices so cattle disappear, and all the birds have left are lead-contaminated deer carcasses and the calves we supplement them with.
Sam Chamberlain, 2005

Reintroduction efforts began in early 1992 and continue today. The population (wild and captive) has steadily increased, reaching over 400 in 2015 (with over 125 wild condors in California).

Patiently perched on a nearby juniper snag, a Merriam's Teratorn dries its wings in the early morning sun. This gigantic carrion vulture weighs 40 pounds and has a wingspan of 12 feet. Soon many individuals of several species of condors and eagles, then a few Occidental Vultures as well as mammalian scavengers, will stealthily circle down for last dibs on bone marrow, skin or gristle. This is a place of dark termination. But then a White-crowned Sparrow sings from a nearby rabbitbrush thicket above a gopher snake probing the lodge of a dusky-footed woodrat. A California Thrasher scratches in leaf litter on the shoulder of a well worn camel track. It is a typical late-Pleistocene morning at the tar pits - 15,000 years ago . . .
Rich Stallcup

You can visit a turkey vulture at Happy Hollow Park and Zoo. Take a walk along the Guadalupe River trail and imagine what our landscape used to hold. You can also visit Lupe the mammoth at the Children's Discovery Museum of San Jose.

Follow these links to learn more about turkey vultures:

Follow these links to learn more about the California Condor:

Follow these links to learn more about early California:

Read more about it at the Library:

Check out these items in the California Room: 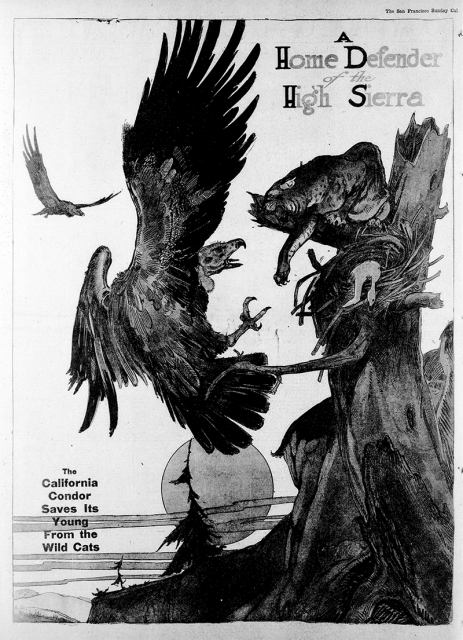