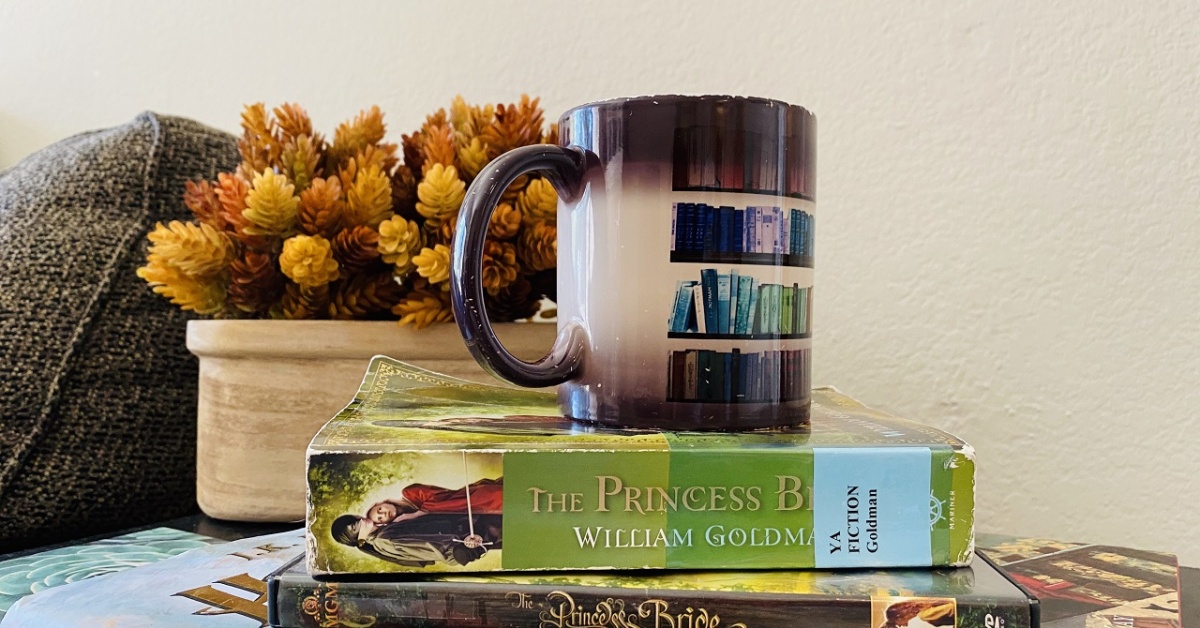 Raison d'être Reads: those that give us meaning! 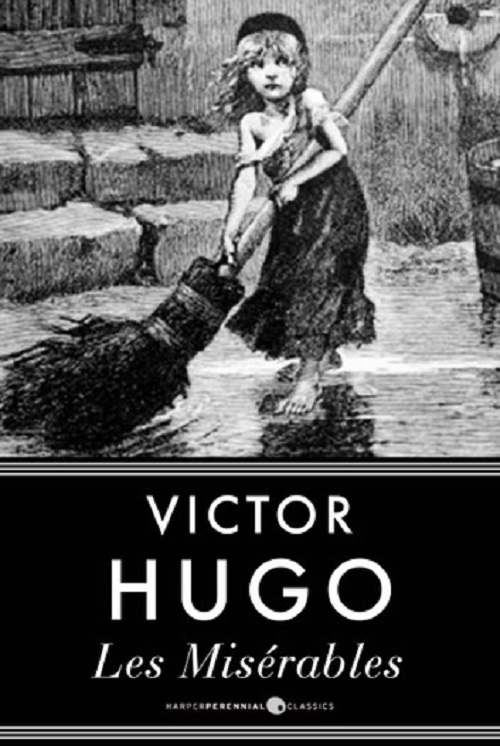 Les Misérables. It's hard to know where to begin with this massive novel. Victor Hugo puts forth, in no less than 2,783 words, a commentary on social conditions that create "hells on earth." Sounds fun, huh? But can anyone be surprised with the overall tone of a book entitled, The Miserable Ones? To expect anything other than misery would be like expecting a storybook ending for the Baudelaire orphans in A Series of Unfortunate Events. Hugo's message about power structures and the havoc such systems wreak on the powerless is told through the main story of Jean Valjean, and the various characters he comes into contact with throughout his life. In a nutshell, Valjean, is an ex-convict who turns his life around in a dramatic way. Through an act of kindness shown to him by a village priest, Valjean becomes a successful businessman and is eventually elected mayor of a small town outside of Paris. Meanwhile, Parisians are plotting revolt! Interestingly, the French Revolution is already long over at this point in history, but it's the long game that matters when it comes to dismantling governments, am I right? This sounds terribly unromantic, and while lots of it is, one of the greatest literary love triangles ever is portrayed in this book! And aside from the love triangle, there are many acts of love (be they romantic, filial, sacrificial) in this story. So, the reward for persevering with the miserable ones is well worth it. I should warn you, good reader, before you read this novel please know that Hugo is master of the tangent. A large portion of this novel is essay. Yes, this novel somehow contains full on essays about the political climate of Paris in the early 1800s, the sewer system, and laborious accounts of the Battle of Waterloo. It is a crazy, wild ride but one of the most mesmerizing stories of the human struggle that I have ever read. For me, this novel has long inspired a raison d'être in life's most trying times. Check out the eBook on Overdrive and the eAudiobook on RBdigital! 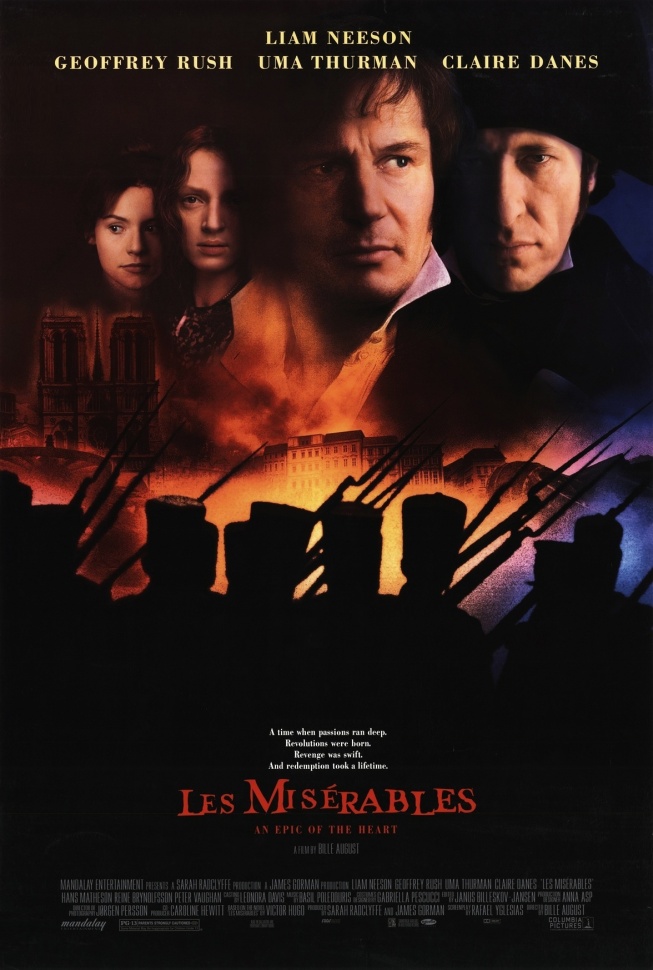 Les Misérables has undergone many adaptations, the most popular of the 20th Century is probably the theatrical adaptation. I was first introduced to this story via the music, so for me I still struggle watching any version of Les Misérables without characters breaking out into song. The 1998 film is a solid adaptation, although my major gripe is that they cut out one of my favorite characters! Remember I hyped up the love triangle? Eponine (1/3 of the triangle) is non-existent in this version. So this adaptation lacks a key tragic, unrequited love subplot. However, the rest of this cast is excellent. There isn't one character who I felt was miscast (unlike the Russell Crowe as Javert debacle of 2012). Liam Neeson plays an empathetic Valjean, and his towering frame is perfect for the character's description. While I am not sure about the hints of romance between Valjean and Fantine, Uma Thurman is a very convincing Fantine. Claire Danes, as always, is stellar. Her chin quiver is like her own, personal special effect. When she pretend cries it can't possibly be pretend; it's physical. Lastly, Geoffry Rush is an impeccable Javert who cannot rest until he finds Valjean. This film can be streamed for free on IMDb TV, so this is the one I review here. However, if you get a chance, please watch the Masterpiece series by Andrew Davies that came out last year! It is the closest adaptation to the book that I have seen, probably because as a six-part series they can afford to include mostly everything. 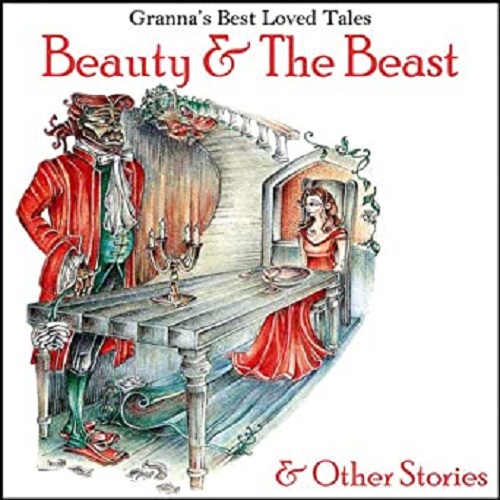 Beauty and the Beast

Beauty & the Beast is an even older story, albeit less complicated, than Les Misearbles. It also comes from France, and inspires young readers and viewers to exercise kindness and mercy. Beauty & the Beast was originally written by Gabrielle-Suzanne de Villeneuve in 1740. It was a novella at about 100 pages, and in 1756 it underwent a transformation at the hand of Jeanne-Marie Leprince de Beaumont. Frankly, I am not sure how this was legal, but I do wonder if Gabrielle-Suzanne and Jeanne-Marie ever had words over this infringement. This is a blog, and it's sadly not about 18th Century French law, so we might have to just assume they were writing gal pals. Anyways, Beaumont's version was more for children and apparently way less boring, and it's pretty much the basis for the English version of Beauty & the Beast enjoyed today. I listened to the audiobook version on Overdrive, and it was a quick and interesting listen! My immediate take-away was that Beaumont's version underwent a transformation at the hands of Disney writers, and while I'm assuming it was fair use by this point, I bet Beaumont would have some words for Disney (get in line, sister)! One huge difference between Beaumont's version and the Disney version, is the former has no Gaston. So, if you are a Gaston fan, or generally appreciate the laughs at his expense, you will miss that piece. What I do like in the traditional version is the use of dreams as a plot device. It is a bit of an easy out, but I like how it implies that Belle has the answers within her. Belle's character in general uses her mind and her heart, which is why she is her father's favorite and why she ultimately saves Beast! That Belle, she has raison d'être! 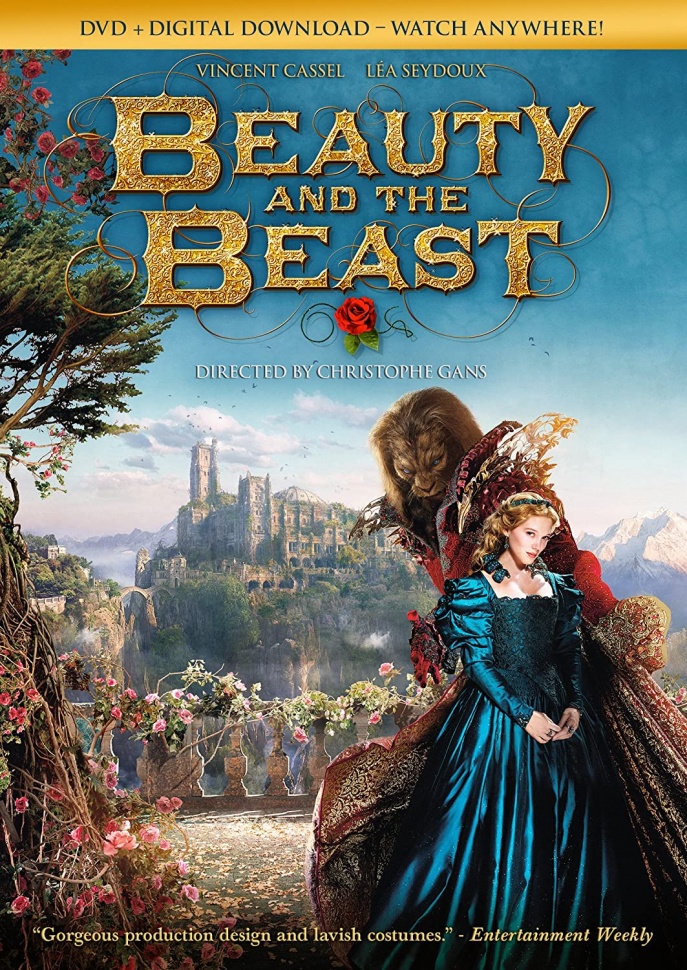 In 2014 a beautiful Franco-German adaptation of Beauty and the Beast was made, and it is available on Hoopla. This film is most true to Beaumont's version, and the things I liked about the traditional fairytale were done exquisite on film. The computer graphics are not quite up to Hollywood standards, but the wardrobe is 100% to French standards. The costume design alone is worth watching this film. However, my favorite thing to this adaptation is Léa Seydoux, who stars as Belle. After watching her performance, I immediately looked her up. She started in French Cinema, but has been in some of my favorite films, like Inglorious Basterds and Midnight in Paris. I really liked the attitude she injects into the character of Belle. She is playful, and her sarcasm even rattles the Beast in a couple of scenes. I loved this version of Belle. I also thought the dream sequences were done very well in this version. I highly recommend taking some time in your busy day of sheltering in place to watch this adaptation. You will not regret it, my friends.